All of the characters grapple with fantasy versus reality in this large, though very welcome, return for "Mad Men". What they think they're getting in their lives clashes with the reality that comes afterward. There's a certain expectation that is demanded from everyone and they are continuing to struggle to meet those demands. It is the middle of the 1960's decade, a time of great social upheval and change, and it's finally coming for the occupants of Madison Avenue. What is really great about this show, something that I would never expect from a drama about advertising executives, is that this episode doesn't just establish the status quo like many season premieres do, but the story moves forward.
The writers trust that the viewers are smart and they can dive into the deep end of the pool without much help. It addresses where every one of the characters are right now (with the exception of Betty and Henry Francis, though they aren't missed) and the possible directions for each of the storylines to go. Don Draper remains the main character, but the premiere presents more shades and personality for every other character in the main cast that Don shouldn't have to carry every episode. 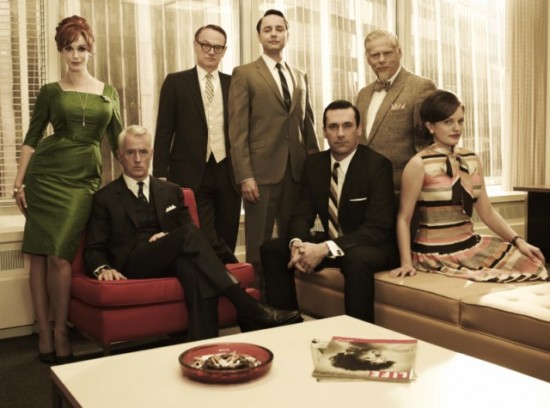 The backbone of the episode was Don's relationship with Megan. The surprise of their sudden engagement in last season's finale has worn off, and they've settled into married life here. Megan was supposed to be the signal that Don had started this new, more healthy stage in his life. Indeed, it seems he has stopped smoking and isn't quick to reach for the whiskey at work. That was the fantasy Don had hoped would come into his life.

The reality of their marriage is explored throughout the episode. There are cracks forming, from Don's seeming indifference to his work (that was expressed in words only to Megan) with his wife present in the workplace. She's now a copywriter under Peggy, and she's put right in the middle of the chaos of SCDP. The company is not making money, and there's rightful fear that they won't recover to keep up with Don unwilling to be the ace ad man he used to be. Don is getting older, and it feels like the world is leaving him behind. He doesn't care about his work, and it used to be that work defined him, and only wants to please Megan.

This seems to be his actual personality, and the company might suffer for it. He's not going to help his young wife along in the business (that seems to be Peggy's job), and that leaves her exposed to its cynical nature that will eat away at her. That culminates in the surprise birthday scene at their apartment. Megan planned the birthday without Don's input, and the party then becomes a microcosm of everything that each character is currently dealing with in their world. Pete and Trudy seem distanced from everyone else there, as they represent the successful up-and-comers who live out in the suburbs. Roger and Jane are sniping at each other, and throughout the episode, I saw that this is how Don and Megan's marriage will end up after time.

Don and Megan don't really know each other, and that bears itself out during Megan's performance of "Zou Bisou Bisou." It's too much of an out-in-the-open display for anyone's comfort, let alone a man as private as Don Draper. It's an obvious demonstration of the wide age gap between them. Megan is embracing an open sexuality that defines the decade (and the next decade as well) and isn't what Don wants to be seen in front of people they both work with. That was the reason he didn't want the party.

The issues that fester at the workplace spill into their home, and he wants none of that. He doesn't want people to see how much he has changed with the turning of age. The fear that he won't be respected (thus, she won't be respected by association) plays out when they return to work. Everyone makes fun of them, some more subtlely (like Roger's teasing) than others (Harry's outright sexual harassment that gets him into hot water). This should play out more as the season goes along. I personally would like to know how much he told Megan about his real Dick Whitman identity. She's comfortable enough with the information to crack jokes to him about it, but the extent to the revelation is left unsaid, and that makes the mystery feel all the more enticing. 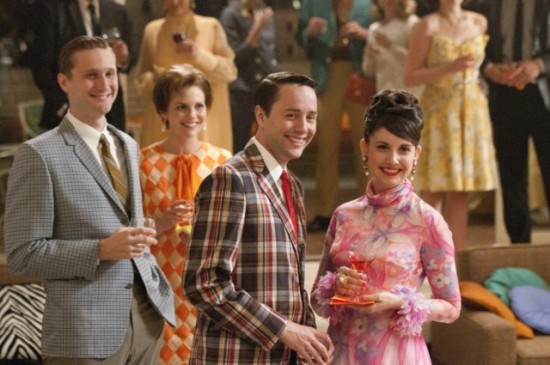 The fantasy-reality dichotomy applies to other characters as well. Joan gave birth to her baby and has been on maternity leave from the office. She desperately misses the office, where she is the queen bee. At home, she is left out of the loop, and I don't think she ever expected that she would have to deal with the urge to stay at home with her child versus wanting to get back to work. Her mother's insufferable presence would certainly speed up her return to the office. She sees the ad SCDP puts out as a joke to a rival company as a way to get rid of her job without telling her.

That's the message the firm is putting out there, and it's completely misread, not only by Joan, but by black people who also think it's a want ad. The end scene with the lobby full of black applicants is the first sign that the social change the firm has largely been insulated from is coming to them, and more of it will come soon. Before that scene, Joan's premature visit to the office with baby in tow brought a lot of the brewing tension between the characters to the surface. The baby gets handed off to various different people and he was an unintentional symbol of each character's mindset. Peggy doesn't want to handle him because it would remind her of the baby she gave up. At one point, it's only Pete and Peggy in the room with the baby and that was a symbol of a life they might have had together, but completely avoided. Also, Pete doesn't seem to like children, even as he has one of his own in his seemingly-happy life with Trudy.

Megan takes the baby, and Joan teases her that she and Don may be the next to have child, much to Megan's horror. Roger says, "There's my baby!" That's a loaded statement, if ever there was one, considering his history with Joan and in regards to this particular child. The entire scene, which was central to the episode's back half, was filled with so much rich subtext that was smartly left unsaid for the smart viewers to figure out. It's this show's trademark attribute.

Even characters with reasonably stable marriages are showing signs of strain. Lane now has his wife and family on this side of the Atlantic, yet when he finds a wallet with a picture of an attractive woman inside, he seems to be indulging in that era's version of phone sex. I briefly had the thought that Delores was a fake because her vocal mannerisms catered so exactly to what Lane was looking for sexually, but maybe that was the point. She is a fantasy that Lane wants to further because she is a person so diametrically opposite to his doting and faithful wife in reality. Nothing is ever good enough for these people. The fantasy is always better-seeming than the reality.

Pete is yet another example of this twisted mindset. He has the American Dream: a doting wife, young child, personally and professionally successful. But it's never enough. He wants, needs more. He complains to his companions on the train about Trudy being so unconcerned with her beauty that she walks out in public in her robe. He's stuck in an office with no windows and a giant concrete pillar. He maneuvers his way into getting a bigger office because he's now the firm's Don Draper for signing clients, but it's not the office that he really wants. The only joy he has in his life seems to be sticking it to Roger by sending him to non-existent appointments. He's living the life everyone wants, but that reality doesn't really satisfy him. If he looked around him, he'd see how good he really has it. He should appreciate that. The change in the status quo, that's coming soon, might not be good for him, even as it's probably good for everyone else at large.