All of the plots in this show move forward in this episode in small ways. There's the ongoing struggle to move Will out of his place at the head of the firm with Diane. It was a power struggle that was getting repetitive so Will made a move to ensure that there would be no more power plays to cause further chaos at the firm. Alicia goes ahead with the IRS investigation into Kalinda's possibly illicit activities. Plus, Alicia is at the center of the Case of the Week and trying to buy her old house with her bigger salary bonus that was given to her in the previous episode.
There's so much going on in the show's landscape, I'm surprised Alicia would have time to be at a blue ribbon panel investigating a police shooting like she does here. The case does coincide with some political manueverings by her husband so that connects it to one of the larger subplots at hand.

I liked that Alicia went right into the middle of the various plotlines. I've noticed that she has been pushed to the sidelines in many of the prior episodes and it was good that she got involved here. What helps is that Diane is so swamped with work at the firm that she recommends Alicia join in on the blue ribbon investigation panel. It's another way for the show to present an area of the law that isn't all about battles between judges and lawyers in the courtroom. 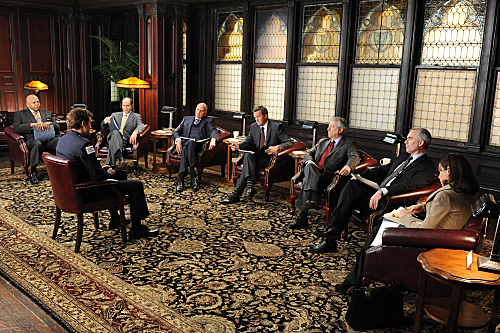 This is the first time Alicia has done something like this, and the audience is naturally put in the position of sympathizing with what she's going through. The blue ribbon panel treats the police shooting with plenty of indifference, and when Alicia asks some initially innocuous questions about the incident, it starts out looking like a mild irritant to the proceedings. At first, I thought this was some form of hazing for Alicia, a way for the boys' club to look upon Alicia as the newcomer who doesn't know what these things are about. The shooting is not as open-and-shut a case as it might seem at first glance. There's the added element of racial tensions, as a white police officer might have shot a black man for being a good samaritan.

It all ties insidiously onto Peter's nascent gubernatorial run for office by the end. I didn't much like that it came down to two clear-cut choices (one being a straightforward accident; the other being a complicated way to tie a racially-motivated police shooting to Peter's office), but I did appreciate that the choices put Alicia in an ethically complex bind. Does she turn a blind eye and move on, or fight this and put her husband in a bad position? She will always be known for her ties to now-infamous State's Attorney, and those ties are often exploited by those looking for some kind of advantage over her. That certainly isn't going to stop if Peter somehow advances from the SAO to the governor's office.

The other subplots in the episode are of a lighter variety than the case Alicia handles by comparison. The struggle to put Will on leave during his suspension continues to play out. It's more and more power plays behind closed doors, and it looked for a moment like it was going to completely fracture the firm and crack the power structure. You've got Eli making alliances with Julius. You've got oily David Lee rolling his eyes at various suggestions on what to do with Will's seat.

Hopefully, this is the last of it because Will makes a unilateral decision to have Diane and the majority of the partners back the senior-most equity partner in Howard Lyman, the lone remaining old man in the office who helped oust Derrick Bond last season. Julius, David, and Eli can't argue with that because Howard is indeed the senior-most person in the room, though I'm not sure how this will perk up business for the firm during the six months Will is gone.

That is especially worrisome if a case like Kalinda's taxes is solved in such an easy manner. I got the sense there was more going on than what was shown. Alicia and Kalinda smoke out the real reason behind the tax investigation and it turned out to be one of Kalinda's jilted ex-lovers. I honestly couldn't remember who the FBI agent was in Kalinda's long line of conquests on the series. The show goes to this well a lot, and once again, Kalinda's feminine wiles and teasing bisexuality get her out of this jam. Again, I don't think this is really the end of that case. It's been built up as this big thing too much to just burn it off in a light subplot of one episode.

Finally, there is the issue of Alicia buying her old house. Her new salary gives her the ability to field a competitive offer on the house. The current owners are obstinate, though, and doesn't budge from the steep asking price. Alicia's real estate agent tells her to go with the personal angle since she lived in that house before, and that gives the show the opportunity to sprinkle in some flashbacks to a time before it hit the ground running. The flashbacks, though somewhat unnecessary, give insight to the family life Alicia and Peter had before and during the scandal that wrecked everyone's lives.

Alicia might or might not have fully wanted the house based on those memories. But the plot moves forward, and she somehow gets the house at the last minute. The show is very good at masking the surprise, as I reacted like Alicia. I thought it was Peter who bought the house without telling her. It was actually Jackie who bought it, probably as a way for her to keep Alicia's marriage to Peter from descending to divorce. Or it could have a political motivation with Peter's campaign for governor getting off the ground. Coming back together under the house the family used to live in would make for a good story to sell to the press or potential voters. If the cliffhanger end of the episode is any indication though, there's going to be a hold placed on all of that.