A fresh focus doesn't quite cover up the fact that "Lost Girl" is showing signs of stress around the seams. This episode should have been a tight little mystery and a feather in the show's cap, but instead there are too many rough touches in the writing, little moments where things don't come together. It's not without merit, but too often the immersion is broken, the fun slithers away, and it feels like a great little show is being let down.
The story is a bit more Dyson-centric as he finds himself on the wrong side of a murder investigation: waking up in an alleyway outside a Dark Fae nightclub, covered in blood, next to the wolf-ravaged body of a Dark Fae. He seeks sanctuary in Trick's bar, gaining some legal protection from both the Dark Fae, who want his head for the sake of justice, and the Light, who are willing to hand him over to avoid a war. While Trick pulls his own political manoveuring to try and keep Dyson safe, it's up to Bo and Kenzi to find the real culprit and clear their friend's name.

It's a fun, standard-issue storyline of the PI genre and for the most part, it's used to great effect. Our characters are playing for higher stakes than normal, but in a much more believable way, as opposed to the "will Kenzi die of foot soup poisoning?" plot from earlier in the season. It's reinforced through the details of the case as it develops, chief among them being the personal interventions of both the Ash and the Morrigan. 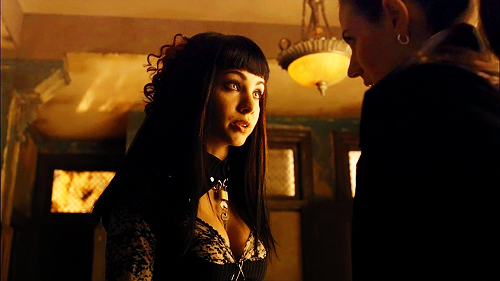 Unfortunately, there are splashes of bad, lazy writing throughout the episode. From the get-go, the writer seems to have skipped a few levels in the Bo/Dyson relationship as they start out far more lovey-dovey than we've ever seen them. A tense dynamic, in which affection is offset by secrets and miscommunication, is tossed out the window for no discernible reason. Would the audience have blanched at Bo helping to clear Dyson's name if they weren't in the throes of something much more melodramatic and typical of TV relationships? Of course not.

And there are moments of terrible dialogue littered all over the place. Not that "Lost Girl" has ever given Joss Whedon or Aaron Sorkin cause to fear their places in the dialogue-writing pantheon, but it all comes to a head in the climax of the episode, when the solution to the mystery is laid out in awkward lines and unnecessary flashbacks and the kind of cheesiness that makes a viewer wince away from the screen.

As much a let-down is how little an insight we get into Fae proceedings, compared to the last few episodes, and the same for the characters. There are a couple of nuggets about shifters and Dyson's past, but they're either forced or throwaway. The shifters have a secret language? Okay, but that's not an attempt to deepen their culture and depiction within the show, it's blunt set-up for the end of the episode. News that Dyson is much older than he looks is hardly news at all, given that it's been true of every other character we've come across.

The Light and Dark Fae are one incident away from some kind of catastrophic war, but again, that's nothing we didn't already know (though it did add to the tension of the main storyline). Even the baddies get short-changed, as the fun, formidable Vex of episodes past becomes the Morrigan's lackey. She, at least, made a very good showing: her confrontation with Bo, Dyson and Trick stands out as one of the high points of the episode.

An unfortunate disappointment: that's really the only way to describe this episode. For once, it’s the A-plot that keeps things interesting as the characters and the mythology stagnate and suffer in its orbit. Hopefully this isn't the start of a trend, especially given that the season finale is starting to loom close.