After dealing with the immediate issue of the Reaper in the previous episode, the long-term problems are explored a bit more in this installment. Meanwhile, Josh’s relationship status gets complicated, to say the least, and Aiden finds himself in an unexpected flight for freedom.
Despite being the most mundane part of the episode (and that’s a relative term, I know), Josh’s situation was as messy as it gets. To some degree, it was predictable, since his rebound with Julia was going to have to run into roadblocks. That’s how it goes. Getting the double whammy of Nora and Suren’s grilling at dinner, though, was an uncomfortable, if tasty, dramatic treat.

Nora’s return did more than just make us realize how unbelievably pretty she is. It also reminded us that Julia is no more safe with Josh than Nora was, and Nora’s life has been thoroughly ruined. And she actually survived her encounter with Josh’s dark side! It seems inevitable that Julia should learn the truth about Josh in some horrific manner, even as he is tempted to kill his maker in the hopes of being cured.

If I have any quibbles about this part of the story, it’s how Nora’s apparent change in perspective was handled off-screen. Either they couldn’t get Brynn back for this episode, or there’s more to the story than Nora is saying. It all feels like a trap, though I am convinced that Josh is going to have to accept that Julia is better off without him. Besides, if Nora is to get a good resolution to her character, it should be through Josh. (And of course, I’m saying this in the hopes of more naked Nora.) 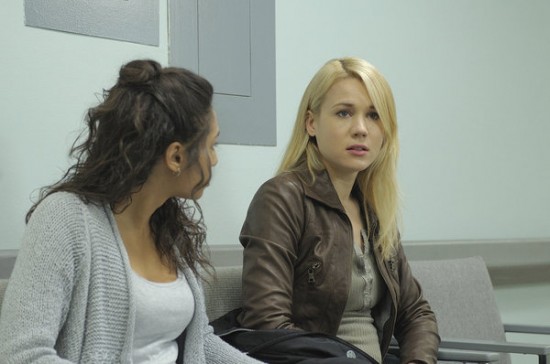 Speaking of relationships that are unlikely to end well, there’s the unexpected twist with Mother, Aiden, and Suren. So Aiden has helped Suren stabilize Boston for the vampire elders, and they get their just rewards. Aiden is utterly banished from vampire society, and given Henry’s involvement by the end of the episode, I strongly suspect that all of this connects. In essence, Mother was waiting for the moment when Suren seemed happy and content with Aiden to punish them both for actual and perceived offenses. Whatever the case, it was harsh.

And like two young drug addicts are wont to do when parents try to separate them, Aiden and Suren decide to go on the run together. Because such romantic endeavors always end well. Even before Henry showed up with his friends at the very end, I began to wonder if it was just a setup by Mother, to give her the justification to wipe out two inconvenient pawns in her bid to control Boston. Regardless, this moment was coming from the moment that Head Bishop warned Aiden that the son always kills the father. (Usually metaphorically, but perhaps more literally in the case of vampires!)

Sally’s plot thread is also relationship-based, but not in the conventional sense. She spends a good part of the episode trying to figure out how to live with the “Scott” personality in her head. Having her enjoy “Paranormal Witness” at full volume was a nice bit of network cross-promotional product placement, but it made sense. As did her desire to make amends, even if it put her at odds with Josh over her decision to ask Nora for help.

I’m glad that they addressed the open questions about Sally’s possession addiction, to some extent, because it reaffirms the notion that the writers aren’t going to let too many plot elements slip off the radar. Sally’s journey is going to be a rough one, especially with the current fracturing of the gang. But since there is a third season, it’s safe to say that the resolution, while bloody, will leave the trio with some hard-earned lessons for the next challenge.