Coming on the heels of one of the most revelatory episodes of “Fringe” yet, this episode feels like a bit of a step down. That the central case for the episode wasn’t particularly involving didn’t help the matter, but there was also something lacking in the overall package, especially in how certain expository elements were handled. Even so, this are minor quibbles overall, and the episode continued the winning streak for this season of “Fringe”.
I’ll start with the case, actually, since it was thematically appropriate to Olivia’s quandary regarding her love for Peter and her worries over how her memories are being altered. It comes down to what one is willing to do to find love, even for just a short moment. That it involved isolating potential human pheromones from murder victims, with significant others as very-short-term test subjects, was a nasty and creepy twist. (Kudos to the production staff for finding a relatively obscure Jon & Vangelis song to complete the package!)

Getting back to Olivia, the idea that one set of memories is beginning to override another must be deeply unsettling. I still don’t think that it makes much sense for the characters to accept, for this long, the notion that Peter was imprinting these memories on Olivia in some way. Even accounting for the fact that these are not “our” characters doesn’t quite justify it. Still, Olivia’s personal situation is perfectly valid, and her struggle is difficult to watch. 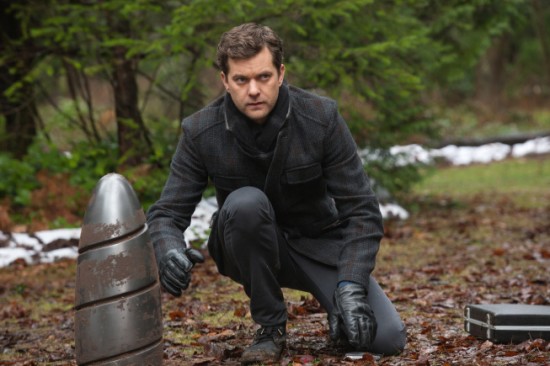 The theme also relates to Lincoln Lee, because Olivia’s current memories and personality led her to an interest in him. Granted, it’s not as much of an interest as Lincoln would like to believe, but it was there. Will Lincoln (or Nina, for that matter) be so willing to let Olivia give herself over to those “original” memories, even if there is plenty of reason to accept that they are real? After all, in the end, the only person with any sense of proof is still Peter, and he will need to convince the others of what he has learned.

As many had come to guess, Peter’s quest to find answers leads him to September, who tells him that he is already “home”. It’s simply that the attempt to rewrite the timeline without Peter in it never took hold, because people cared too much about Peter for the memories to be erased. This strongly supports the “painted over” theory, which maintained that the new timeline was more of an overlay than a true reconstruction of reality.

One reason for quibbling with this revelation was September’s wishy-washy explanation for Peter’s continued existence. Very early in the season, I conjectured that Peter’s appearances to Walter and Olivia was due to something very similar, but that it expressed itself in a form of quantum entanglement. In other words, there was too much inherent connection between Peter, Walter, and Olivia, at a fundamental level, for the technology of the Observers to overcome.

The concept of quantum entanglement is not just a convenient metaphor. In essence, if two particles are entangled, then knowing something about the quantum state of one particle tells/defines the complementary state in the other particle. Even if only one particle was known, the properties of the other particle could be deduced in absentia, based on the entanglement. Conceptually, one might say that the disappearance of Peter left Walter and Olivia with some inherent but unconscious recognition that there was something missing, which in turn also defined it. That “Peter-shaped hole” could only be filled by Peter, and thus by extension, Peter could not be fully excised.

The same logic would lead one to believe that Peter’s return should have a similar effect on others over time. Olivia was the one most connected to Peter, with Walter a close second. And since this version of Walter is more damaged, even compared to the “original” Walter, he may not recognize the process taking place in himself. Ultimately, restoring the timeline as it should be could involve Peter stepping into the Machine again, to ensure that the repair doesn’t put everything right back into the same state it was in at the end of the third season.

Having September short-hand those general concepts by saying that it’s “love” feels like a bit of a cheat, but it may also be a recognition on the part of the writers that the audience may not be able to follow the hand-waving within intricate quantum theory that it represents. (Even an audience as intelligent as that of “Fringe”.) And ultimately, what is the core of the entanglement between Peter, Olivia, and Walter? It’s all love of some sort, or the biochemical equivalent, which takes us right back to the case itself.