With just a few relatively minor apparent deviations from the historical record, “Spartacus: Vengeance” has managed to set up the climactic battle between Glaber’s Roman forces and Spartacus’ rebels with dramatic flair. I think it’s safe to say that anyone who complains about “lack of action” after this episode should have their head examined.
I’ve said it before, but it bears repeating: the supposedly slow moments earlier in the season were completely necessary to set the stage for the character beats in the second half. This isn’t the sort of navel-gazing meandering that undercuts many shows in the genre that rely heavily on season arcs. This is very much “Game of Thrones” territory, where sex and violence are mere window dressing for devastating character drama.

I was under the deeply mistaken impression that Ilithyia was done with Glaber. I should have known better. Ilithyia is the ultimate survivor among an entire den of sharks in the House of Batiatus. Considering that she wins out over Lucretia and Ashur, that’s saying something. Her gory dispatch of Seppia, followed by her “reunion” with her husband, is easily one of the highlights of the episode. (Never mind the implied imagery of Seppia’s lifeblood spraying all over Glaber’s helpless face, Ilithyia triumphantly towering above him!) 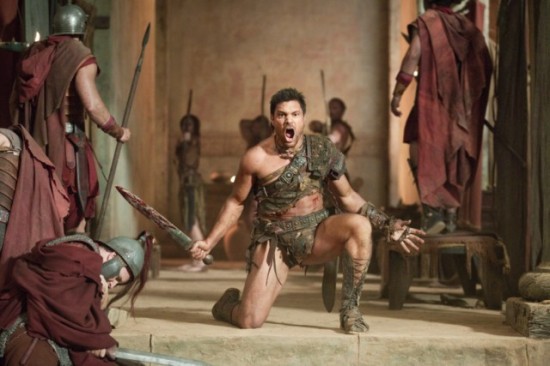 This was in stark contrast to the unfortunate end of the relationship between Spartacus and Mira. There were some who felt that Spartacus was moving on from his intense memories of Sura too quickly, but the past two episodes have made it very clear that there is a line that has never been crossed. What that will mean for Mira is hard to know. As the series’ warrior woman (now well-matched with Saxa), she fills a very necessary role, showing that the rebellion is about more than a brotherhood. At the same time, this is how characters are often primed for sacrificial action.

A lot of this season was about how Spartacus would have to deal with the factions within his own camp, and how he would get them on the same page before Glaber arrived to overwhelm them with his troops. His methods were nice and sneaky, lulling the divisive leaders of his hand into supporting the ongoing contests, only to find themselves tossed together in a contest of their own. Spartacus neatly forced them to put actions behind words; either they would set aside grudges and cement the bonds they had been cheering, or they would prove once and for all that unity was a mere fantasy. It was a bit predictable, but it still worked well.

This is in no small part due to the fact that it was all prelude. A lesser series might have used that conceit for the entire stretch of the episode, but the writers capped this episode with a long and bloody battle sequence that rivals anything that was done for “Blood and Sand”. Even as they set the stage for the historical solution to the rebels’ problem, which is featured heavily in the promos for the season finale, they toss in the twist of Varinius’ apparent premature demise.

I can’t blame them for that, just as I wouldn’t blame them if they chose to ignore the historical record and simply leave Oenomaus with one eye, rather than his apparent fate. That the record shows Varinius stepping in after Glaber is a bit unwieldy from a season arc perspective. Glaber’s instability has been the core of the Roman arc this season, and Varinius’ historical follow-up just doesn’t have the same hook to it. Better to combine two assaults into one, maximize the dramatic tension, and let Glaber stay in the front seat.