And now that secret that wasn’t much of a secret is fully revealed. Frankly, anyone who didn’t see this coming a mile away just wasn’t paying attention. That it happened to coincide with the return of another old favorite at the same time was icing on the cake. And since Head Lucifer is involved, that cake is probably on fire and trying to eat you.
First things first, we have the return of Castiel, who was just reformed after his unfortunate brush with self-appointed godhood into an apparent human being with super healing powers. Without a memory, he was just a kindly man named Emmanuel. Naturally, things get dicey when the demons under Crowley’s watch decide that the Brothers Winchester are back on the menu, since they haven’t done much to stop the Leviathans since the deal was struck. (And I’m sure Crowley is turning a blind eye, not being undermined as King of Hell.)

With Cas not aware of his true nature, Dean is left on his own to survive the demonic onslaught. And why is that? Because Sam has finally succumbed to the endless assault of Head Lucifer, going quite insane in the process. And so he’s been tossed into a mental institution, where he undergoes a delightful bit of torture at Lucifer’s hands. Jared Padalecki deserves an award for this episode alone. 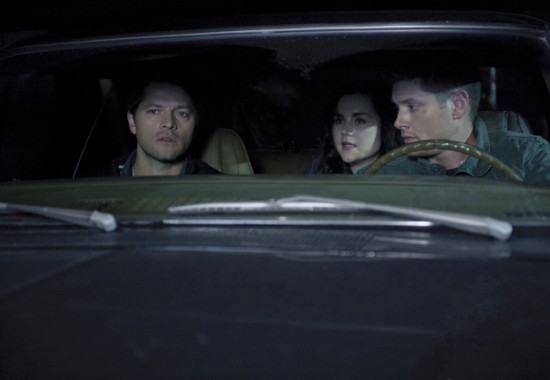 All of the main players are put to the test, and they all make the kinds of choices we would expect at this point. Dean is angry at Castiel for putting Sam in this position, but he also trusts that Cas has been restored and does his best to convince Cas that healing Sam is the best way to atone. Having been to Hell and succumbed, he knows a little bit about redemption. Even so, his alliance with Meg promises to be interesting. (Rachel Miner makes a welcome return as Meg, though I didn’t recognize her initially.)

Sam was struggling to distinguish reality from devilish hallucination, but it wasn’t enough to keep him from recognizing what Marin was experiencing. (Marin was played by Kacey Rohl, daughter of oft-time “Supernatural” director Mike Rohl. Beyond being gorgeous in a mental institution, she’s perhaps best known as Sterling on “The Killing”.) For all that Sam has made some seriously questionable choices over the years, the fact that he digs deep to save the life of a stranger, while under assault by Lucifer himself, demonstrates his true heroic nature.

Perhaps as much an honorary Winchester as Bobby was (and, by all apparent accounts, is), Castiel rises to the challenge when he can’t directly oust Lucifer from Sam’s mind. Instead, he takes the vast majority on himself, and effectively takes on Sam’s burden. Since Cas was the one who caused the cracks in that wall in Sam’s mind at the end of the previous season, it only makes sense that he would share in the consequences.

Towards the end, I thought perhaps this was going to be how they explained Sam’s absence for a few episodes. (Jared wanted to take a little time off for the birth of his son.) Who wouldn’t see a restored Castiel as a suitable replacement for a little while? Instead, Castiel is stuck in the mental institution in Sam’s place. However, I don’t think this was a one-time appearance, since Meg got herself a job to stay close to her favorite angel. If nothing else, Castiel seems likely to get a much better resolution to his arc than the beginning of the season appeared to deliver.