SciFi Vision | All Reviews | Television Reviews | The Wilds Season Two Shines, but not Quite as Bright

The Wilds Season Two Shines, but not Quite as Bright

May 6th Prime Video premieres the second season of the highly-anticipated young adult series The Wilds. Season one centers around a group of teenage girls stranded on a deserted island after a plane crash, however, it is revealed early on that it was not a real crash but rather part of an experiment perpetrated by Gretchen Klein (Rachel Griffiths), out to prove that women can band together and survive without the problems associated with a male-dominated society. She called the girls group the Dawn of Eve.

The season follows the girls as they struggle to find ways to endure and come to terms with their predicament, interspersed with flashbacks of the hardships they faced before the island and flashforwards of after they are “rescued” and held at a bunker by Gretchen and her men, still being lied to.

While on the island, one girl, Leah (Sarah Pidgeon), starts to suspect that the crash is not all it seems and that one of the girls, Nora (Helena Howard), is in fact in on the ruse and communicating with someone outside the island. Of course she is right, but no one believes her. 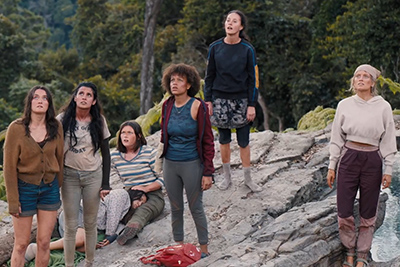 Season one on the island ends when tragedy strikes, and after Rachel (Reign Edwards) follows, Nora, her sister, into the water, she is bit by a shark, returning without her hand or her sister.

Fast forward to the bunker, where Leah finds a video feed of another group of teens on an island, this time all males, called the Twilight of Adam. This is where season two picks up, introducing the boys, a control group in the experiment, and showing their experiences and how they differ from the girls.

Thankfully, the drama continues to be engrossing, both on and off the island. A lot of fans were disappointed that the writers chose to include the boys side, but it makes sense to the story and helps provide a balance, showing how they not only struggle to survive but handle things differently. However, one of the inherent problems of season two is that rather than the ten episodes of the first season, the second is cut down to eight, and with all the new characters, there is not enough real estate to devote to each boy to flesh them out in quite the same way as the girls.

One of the things I really enjoyed about season one was the mystery element of the series and trying to figure things out. Unfortunately season two doesn’t have quite so much of that since we know most of the basics of why the teens were put on the island. There is of course the question of what happened to Nora, but without her on the island, there is no one to communicate with Gretchen and her team back in civilization. 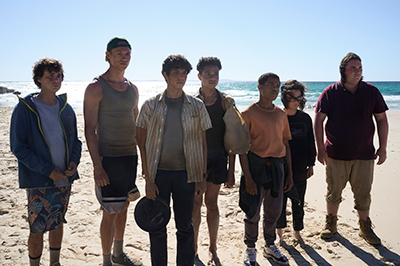 There is, however, a bit of a mystery at the beginning of the season as to why the boys did not make it the full fifty days on the island like the girls, but it only spans the first four episodes. The rest of the season is spent dealing with the fallout of the event and of course trying to show what shaped the boys into who they’ve become.

Thankfully, the series does still show the girls side of the story as it continues to progress. The focus of the girls remains on the island and in the bunker and their strengthening relationships rather than a bunch of flashbacks this time. We watch Leah continue to break down further from no one believing her conspiracy theories as Rachel mourns her sister. Toni (Erana James) and Shelby (Mia Healey) learn to be a couple while Martha (Jenna Clause) continues to deal with past trauma. Fatin (Sophia Ali) learns to take care of her friends, while Dot learns what it is to have people to take care of her.  This is where the series shines the brightest, however, it’s not quite enough and the season is a bit lackluster at times.

The end of the season, however, will definitely have fans clamoring for a season three and rightly so. Nevertheless, the season does lack some of the nuances that made fans scour and rewatch the first season for clues and may not be as well received. Regardless, season two is definitely binge-worthy, and although perhaps it will bring more Lord of the Flies type comparisons than Lost in its sophomore venture, it’s still is an entertaining ride.
Twitter
BotonSocial por: SocialEmpresa
Category: TV Reviews & Recaps