On tonight’s episode of Doctor Who, the Doctor takes off her conversion plate to avoid Swarm disintegrating her, but ends up splitting herself in three: one stays outside the universe, one joins Karvanista and Bel on the Lupari ship, and the other reunites with Dan, Yaz, and Jericho in the tunnels.

Through the course of the episode they discover that the Sontarans, having used Claire to find the time and location of the final Flux event, have sent out a broadcast trying to broker peace with the Daleks and the Cybermen, but it’s a ruse. They know that to stop the Flux, which is made of antimatter, they need to hit it with matter, and they plan to use their enemies to do it and the ships of the Lupari who they massacred to shield them, taking control of the entire universe.

Eventually the Doctor and her friends stop and exile the Grand Serpent, who was working with the Sontarans, and gain control of the Lupari fleet to shield them from the Flux. They disperse the rest of the Flux energy into Passenger, at the suggestion of none other than Diane, who along with Vinder was able to escape the prison and call for the Doctor. Unfortunately, Jericho can not transmat away from the Sontarans and is pulled into the Flux with them. 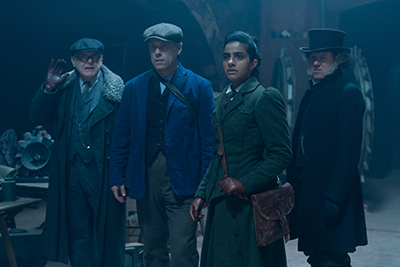 That leaves the third of the Doctor with Swarm and Azure, who planned to not only destroy the universe but keep playing it over an over in a loop to make the Doctor suffer, summoning their savior - time, as their witness. However, when they attempt to release “the savior” from Atropos, having transformed into Swarm’s image, it tells them that the Flux has been extinguished and they have failed. Swarm tries to give Time the Doctor as sacrifice, but instead, the doppelgänger disintegrates the two of them.

Transforming into a doppelgänger of the Doctor, Time puts her back together but warns her that her own time is ending. Nothing, no regeneration, no life, lasts forever

In the end, the Doctor, having not seen the memories it contains, gives the pocket watch to the TARDIS and asks her to hide it - unless she “really asks for it” again.

As an ending to wrap up the six episode story arc, the last episode may have been an exciting one, but it was still a mess. The episode had a lot of action and was very fast paced, but that being said, once again, there was a lot shoved into the episode, and I was left scratching my head at some of what I saw.

First, I want to talk about a few of the truly good moments, even if they were few and far between. The highlight of the episode for me was the Doctor being split in three and her interactions with her other selves. There were some witty moments in there and it genuinely was a fun episode that had the perfect tone, even if it was hard to keep track where so many Doctors were going. Unfortunately that also meant that there wasn’t much room left for the companions and they felt under utilized as they have as of late. I did appreciate, however, the Doctor admitting to Yaz that she’s been shutting her out. I also was happy to see Dan reunited with Diane, but after all that, for her to only refuse to go out with him, it seemed only to be in service of the story for a reason for him to go off with the Doctor again. 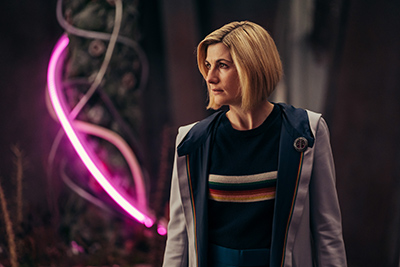 Aside from the main cast, I was pleased with Vinder and Bel’s reunion and was glad for that payoff. It’s kind of sad though that the supporting characters that I found the most interesting were not who I should be wanting to see but rather new characters. Speaking of, I did like the idea that the Doctor was close with Karvanista at one point and he was perhaps even a companion. It does make sense that she may not have only taken humans along for the ride. Regardless, I do hope that he appears again on the show. He has the best lines and I really enjoy his banter with Dan.

I also will say that the multiple alien threads were tied together decently (minus the angels who just disappeared), and the reason that the Daleks and Cybermen were thrown into the mix made sense, for the most part. I’m guessing though that somehow probably some of each race will make it out of the Flux to fight the Doctor another day.

For everything I liked, however, there were parts that annoyed me about the episode. I think probably the part that frustrated me the most was the ending. First of all, Azure explained how they wanted to destroy the universe and play it in a loop forcing the Doctor to watch and suffer because that’s what she did to them, but it never explains what exactly she and Division actually did. I’m not sure that that is supposed to remain a mystery so much as it’s big plot hole or at the very least something that wasn’t explained well enough for me to understand. I do have to say though that I did enjoy Azure trying to understand the Doctor’s nature. 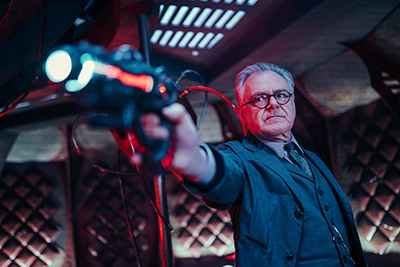 Regardless, even a bigger mystery was left unanswered. After spending more than even this season trying to recover her memories, the Doctor gets them back, only to hide them from herself without finding out what they were. It is implied at certain points in the season that perhaps the Doctor knowing is dangerous, or she is a better person for who she’s become without them, but without knowing what the memories actually hold, it’s hard to tell.

The season on a whole has been a mixed bag for me. There has been both positive and negative, but over all, it felt like a story that needed at least ten episodes to tell but was crammed into six, leaving out important bits along the way. I really thought that the single arc across the six would be a cool twist, but it ended up being more of a detriment, in my opinion. Everything felt like it was building up to something big, only to fizzle out and leave things unanswered, and not in a good way. I’m curious to see how the New Years finale fits into the arc, if at all, and if it doesn’t, maybe that’s actually a good thing.
Twitter
BotonSocial por: SocialEmpresa
Category: TV Reviews & Recaps