In Netflix’s new series First Kill, high school student Juliette Fairmont (Sarah Catherine Hook) is feeling the physical changes in herself more and more each day, taking pills of blood to forestall her symptoms of bloodlust, which won’t stop until she finally makes her first kill, the one thing she does not want to do. Her life becomes more complicated when she develops a crush on new student Calliope “Cal” Burns (Imani Lewis), however, unbeknownst to her, Calliope is from a family of hunters who will stop at nothing to kill all monsters, including vampires. It’s a new take on the classic story of star-crossed lovers Romeo and Juliet (perhaps here Juliet and Juliet), but with a supernatural twist.

As much as the basic plot of the forbidden love story has been done before, I did find it enjoyable. Hook and Lewis are believable in their respective roles and they do have chemistry. The supporting cast I also thought was chosen well. The friendship between Juliette and Ben (Jonas Dylan Allen) I thought balanced the romance of the story in a positive way. I also liked the dynamics of the Fairmont family, and the vampire lore, at least to me, was fairly original and interesting. Also standing out were the scenes between Juliette’s mother, Margot (Elizabeth Mitchell) and Calliope’s mother, Talia (Aubin Wise). 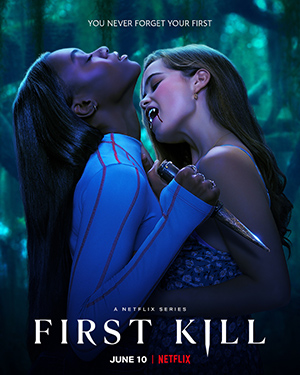 Some people may not like that there is quite a bit of voice over in the episodes – from both characters’ points of view – however, I liked the juxtaposition of the two and how the storylines often paralleled each other but on the flip side of the coin – the importance of their coming-of-age first kill, whether it be from draining or banishing monsters, their struggles with making their own choices while also staying true to their families and their roots, and more.

There wasn’t a whole lot of gore, which was surprising, though it didn’t necessarily need it, as the focus of the story really is on the relationships and not on the monsters. The effects that were there, however, worked.

Although predictable at times, overall, I did find the series mostly entertaining. It is definitely geared more toward a teen audience, but I didn’t find myself bored. It wasn’t the best vampire show ever, but it definitely wasn’t the worst either. I also appreciated that there were some other supernatural creatures thrown into the mix. If you are looking for a supernatural romance, give it a chance, and you might be pleasantly surprised.
Twitter
BotonSocial por: SocialEmpresa
Category: TV Reviews & Recaps