Imagining what might have happened differently in one's life is something a lot of us do on a lark. It's a pipe dream, of course, but in the case of Michael Britten, it's something he's literally experiencing.
The cases he works in this episode are completely different, as they should be in every episode, but the key connecting detail is someone from his family's past. Her presence in both cases brings about questions of destiny and free will. It also explores how a person deals with overwhelming grief in the face of deep loss. Michael uses the knowledge gleaned from the two versions of Kate the Babysitter as a message to help him get through to his son. Even if the realities Michael is experiencing are actually real or a product of his overactive imagination, he has come to further accept this as a crucial, if really outlandish, way to work through the trauma of the accident. 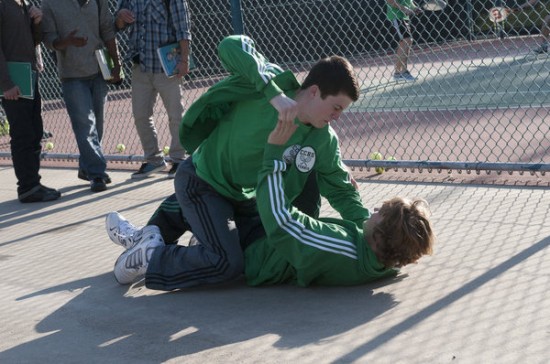 The concentration is once again on Rex. His emotional volatility boils over when his best friend takes a tennis racket without asking and then proceeds to break it. The smallest things always seem to cause the break. Given the way Rex entered the sport of tennis as a way of holding onto the memory of his lost mother, the very first question that Tara and Michael should have asked of Rex was if the racket held some emotional significance. The end revelation that the racket was formerly Hannah's was telegraphed in this way, but I appreciated the show's restraint at not belaboring the point.

Rex keeps shutting his father out, unwilling to articulate the storm of emotions he's going through. It would seem a little strange that he'd be acting this way right after an episode where he was kidnapped and almost died, but that's not the show or storyline's fault. The network shuffled around the episodes that were produced. Nevertheless, it's a very honest look at the father-son dynamic here, as Michael is unsure of what to do. He's getting help from many sources, as he uses Hannah's advice from the Hannah world to connect with Rex. That doesn't work. He could ask the two psychiatrists, but both doctors are only concerned with figuring out which is a dream and which is reality.

Enter Kate the Babysitter. In the Hannah world, she's grown up to be successful and functions only as a witness in a case of suicide. She had some wine spill on her dress, which turns out to be a key piece of evidence to what was going on on the boat and led to the victim's death. In the Rex world, Kate is one of the perpetrators of the crime in question (a notorious partier gets beaten to death for money to supply Kate's drug habit).

In both worlds, Kate lost her sister at a young age. It's how she reacted and what her mother did as support that made Kate diverge in either reality. She shut out her mother (like what Rex is doing to Michael now), and drug addict Kate never quite turned her life around when her mother gave up trying to help. Successful Kate had a mother who didn't give up. So Michael slowly tries to get through to Rex, and he won't stop until he's sure his son has recovered. It's a little too neat an explanation, but I really liked the attention paid to the smaller, finer details in how Michael's family processes grief and loss. He has seen, first-hand, the results of two different parenting styles and two different fates for one person.

I also find it fascinating that both psychiatrists suggest to Michael the question of which reality is real or a dream. It could be that neither is real, and that this is a complicated way of dealing with the aftermath of the accident. Is it such a coincidence that he happened to meet Kate at this point in time after not seeing her for so long, and that she proved so crucial to both cases?

We are left to come up with answers on our own, and that's part of the fun with this show. Even Michael can't make sense of it, and he's already expressed a sentiment not to find an explanation. It's what makes the conspiracy angle (which thankfully goes unmentioned again) feel like such a cheat. But that's a question to explore on another day. Right now, we're figuring out the clues along with Michael. That's a great way to get the audience to invest in the hero of the story.