As this episode was running, I actually felt the slightest bit of sympathy for Quarles. Then I remembered that he is a low-down, sadistic psychopath who is probably even more dangerous now that he has nothing to lose. Boyd had made it his mission from the beginning to get rid of this interloper, and with the sneaky way in which he stole the sheriff's election out from under Quarles' clutches, his job was finally finished.
Quarles was done in Kentucky. So he decides to take out all of his anger on Raylan. It's all he has left to do. Like Raylan last episode, when he made it his mission to take down Quarles. This ongoing conflict drives an episode which was rather light on plot. Quarles' complete defeat in Harlan gives a good opportunity to explore his backstory and psychology behind his actions up until now. It's altogether disturbing, and makes me think Raylan is going to regret not putting him down sooner rather than later. 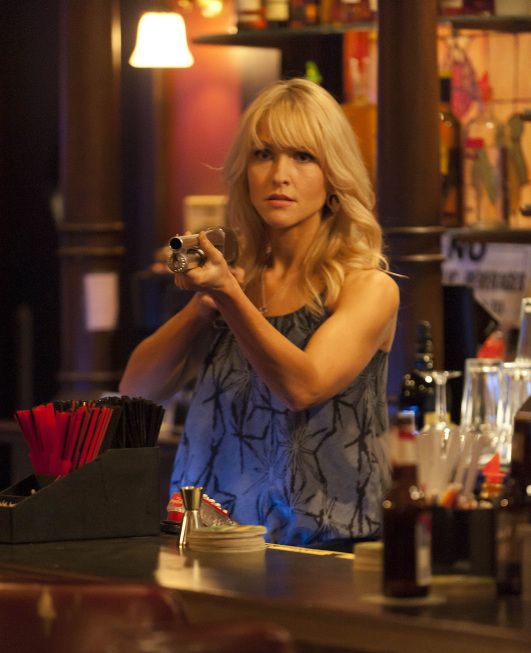 The show got a lot more out of the sheriff's election storyline than I expected. Napier's deputies were willing to frame Shelby as a desperate attempt to turn the election in Napier's favor. It might've happened too, if not for the quick thinking from Shelby and the threat of a very large gun. Boyd does a very smart thing when he retaliates, and goes after Napier's sister. He doesn't threaten her with bodily harm, but rather uses his brain and overwhelming charms to get exactly what he wants. Napier's sister was a backup plan, in case the the election didn't go the way Boyd expected.

Thus, it came true, as Napier somehow wins re-election. I loved the scene where Quarles quietly exits Napier's office after he gets the news that Boyd used the outdated anti-nepotism laws of Kentucky to put his man Shelby in office. That's followed by the excellent scene where Boyd basically tells Quarles that he's done. Boyd's speech fits exactly what Quarles has been doing since he arrived in Harlann County, and he adds an extra amount of flair by calling Quarles a "Conquistador" instead of the "carpetbagger" term he used earlier in the season. There's still the chance that Quarles might be so upset over this that he might kill Boyd along with Raylan.

What follows ranges from disturbing to unsettling. A teenage kid comes into Wynn's RV and pulls a gun on both Quarles and Wynn. He is a friend of Brady Hughes, presumably the person Quarles kept bound to a bed and killed in the house from earlier this season. Quarles doesn't fear the kid or the gun, and proceeds to explain the hellish way in which he grew up. Quarles suffered at the hands of drug addict for a father, a man who made Quarles a prostitute to other men in order to pay off his debts.

It was gang boss Theo Tonin who saved Quarles and forced him to kill his deadbeat dad at the tender age of 14. It's ugly, but it explains how Quarles is the way he is today. Even when he's high off oxycodone, he manages to overpower the kid (so that the kid likely suffers the same fate as his friend in the end) and brazenly walks into Raylan's bar to tell him he will eventually kill the Marshal. That's presuming the other things from his job don't kill him first.

The scene did wring a lot of tension from what might happen between the two men. Raylan doesn't know about the Derringer gun Quarles has hidden in his sleeve. It looked like he was going to use it if it weren't for Raylan's attractive bartender friend threatening him with a shotgun. That hidden gun is going to play a big part in their next confrontation, I think.

I haven't mentioned what was happening with Dickie Bennett in this review. He gets himself pardoned for his crimes, and put back into play for his mom's lost fortune. The money is under Limehouse's watch so it's likely Dickie will come back to try and take the money somehow. I have to wonder how the writers will fit this into the final three episodes of the season and make it not feel rushed. I think there's going to be something akin to a Mexican standoff in the end, with the Raylan-Quarles-Boyd conflict intersecting with Dickie and Limehouse. The outcome of that, and who will be left standing, is very much still in question.