Ringer 1.18 Review: "That Woman's Never Been a Victim Her Entire Life"

This episode was running efficiently for about a half hour, stumbled a bit, then recovered its footing somewhat at the end. Frankly, I think that's quite an accomplishment given the narrative maze that's been created and passes for an overall plot. That's the impression the show gets when this is the first fairly straightforward episode done in a long time.
Characters aren't lying to each other, for the most part. They are honest with each other and helping to figure out what is happening to them. They face the consequences of their actions. Sure, Siobhan remains a vindictive and manipulative liar, but there's a sliver of remorse behind her voice as she confesses to some of her actions. The episode doesn't quite nail the landing all the way to the end, but there's finally some clarity behind the various threats, and that means the slightest hope that "Ringer" can get better.

Andrew getting shot by the mysterious gunman clarified many of the conflicts brewing on the show. Bridget-as-Siobhan confesses some of the events from the beginning of this season. That was a hitman who tried to kill her, just as it was in this situation. Only, this time, Andrew got hit. At the beginning of the show, there was only a vague idea of who sent the hitman at Bridget. Here, the suspects have multiplied. Siobhan might have arranged the two hits on her sister (the theory I'm sticking with). 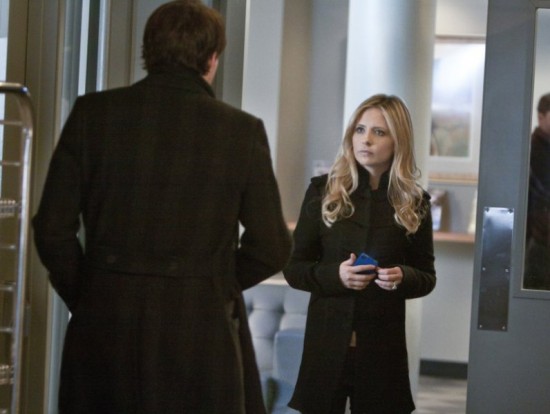 Macawi could have sent the two hitmen for Bridget, but mistook Siobhan for her each time (the one theory the show is espousing for now). Or the most recent hit on Siobhan could have been Olivia trying to take out everyone who has knowledge of the Ponzi scheme. That doesn't explain the first hit on Bridget at the beginning of the season, and I'm of the thought that Olivia is no longer a villain in this story. The Ponzi scheme storyline doesn't have the legs that the writers thought it would have. In this episode, the show chooses to move along with the other two possibilities in the continuing search to kill Bridget.

I think the fact that Andrew got shot means that it will push Siobhan into taking out Bridget herself. Her various arrangements for other people to kill her sister have turned out some disastrous results. One hitman's body disappeared, never to be found. The other botched it, though I'm thinking Siobhan never expected Andrew to jump in front of the bullet and for the hitman to run away. Agent Machado's investigation into the tarot card that conveniently falls out of the hitman's pocket leads to a dry cleaners, which I think is connected to Siobhan somehow. She might have been the mysterious person the dry cleaners girl phones after Machado confronted her.

Since it's also discovered that the hitman in question was someone working for Macawi, this might mean that Siobhan and Macawi have teamed up to kill Bridget. The show likes to play fast and loose with its mysteries so I'm not expecting any of this to hold up in the future, but at least this episode got me to engage with the show more than it has since it came back from the winter hiatus. It's a good sign that they got most of the major players involved, though.

Agent Machado and Bridget are now combining their storylines while Siobhan keeps manipulating Henry every which way. She tells him that she's going to come clean, but uses it as leverage so that he can stop being angry at her, only to tell her that he was the one who killed Tyler. It's really such thin, whiplash-type plotting. This coming from a show that turns Andrew from sympathetic to almost-evil back to sympathetic within a span of a handful of episodes. So we'll see how long this relationship can truly last.

I think I've long since given up trying to make sense of all the scheming that occurs in this show's plot. At least with this episode, many of the characters come clean with what they've been doing. That's a good start. They should have done that many episodes ago. Juliet tells Bridget about the whole fake-rape-extortion plot that ended up going nowhere fast.

What is the purpose of Catherine's presence in the narrative now? Better to end that subplot now and concentrate on bringing the truth behind Siobhan's long-term plan to light. The reunion between twin sisters is coming, and time is running out in this season to show what the fallout of that event will be.