As I've come to expect from "Merlin", the really big plot developments are always saved for the finale, which generally makes them the highlight of any season of the show. Unfortunately, this has the effect of making a lot of the episodes in between feel like filler. This year was a bit better than any previous one in that regard, but it still falls well below my expectations. Still, we're at the finale now, and it's hard not to appreciate it for basically being the kind of episode that we really should be seeing a lot more of on "Merlin".
One of the problems with this finale is that it doesn't feel enough like something that the season has been building up to. Really, the majority of the season has been comprised of Agravaine and Morgana trying one unsuccessful plan after another in an attempt to overthrow or at least weaken Arthur and Camelot. If all of this had somehow helped facilitate the invasion of Camelot in the finale, it would have worked better. But it really didn't, so we're left feeling that much of the season has been a waste of time. It was only the previous episode that were were first introduced to Helios, the Southron warlord, who would provide the manpower needed to invade Camelot. 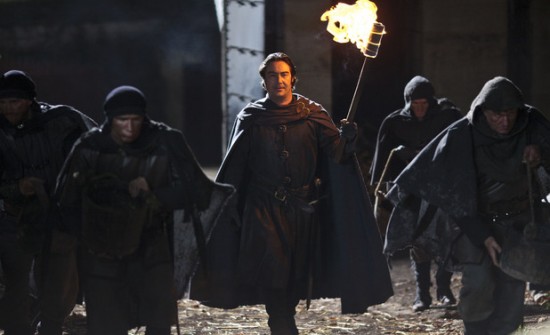 It doesn't help that this plan to invade Camelot isn't terribly interesting. There's really very little to distinguish this attempt from previous ones other than the fact that Helios is simply dangerous enough and motivated enough to make it all happen. And we never really get a clear idea of his actual reasons for wanting to overthrow Camelot, other than his implied thirst for power and wealth. Introducing Helios earlier in the season might have been the smarter plan. Helios has the potential to be more than just the muscle, but he's had so little time to develop that he comes off as just a slightly more sophisticated version of Cenred.

Still, Agravaine and Morgana are the more important villain characters here, and it's somewhat satisfying to see their all-out assault on Camelot prove to be extremely successful, to the point that Arthur, Merlin, most of the Knights of the Round, and a large number of regular citizens are forced to flee from the city into the wilderness. Our heroes have been in this kind of position before (at roughly this point in the previous season, actually), so we know it's only a matter of time before they gather allies and reclaim Camelot.

I must admit, I know next to nothing about the Tristan and Isolde legend. I was aware of a connection to Arthurian legend, and that there was a romantic element to the characters, but that's about it. I had to do some quick research to learn more about them, and I still don't feel as though I have a very good understanding of them. The impression I got from my brief research was that their connection to the Arthur legend was more of a late addition, and that the Tristan and Isolde story originally stood on its own. I like both of them well enough here, though, and it seems likely that they will play an even bigger role in the second part of the finale.

I mentioned back in my review for "A Servant of Two Masters" that Agravaine seemed to possess some degree of actual feelings for Morgana, in spite of the fact that Morgana's treatment of Agravaine has been less than optimal. All Morgana has done is berate, threaten, and insult him. He seems to be just a tool to her. This might be a bit of a stretch, but I'm beginning to suspect that Agravaine may actually turn against Morgana before this is all over. I find it highly unlikely that she will ever want to reciprocate Agravaine's feelings, and I think that Agravaine won't be terribly happy once he realizes how unimportant he is to Morgana.

Overall, the finale does a solid job of creating a sense of drama and peril in its build toward the second half of the finale, mostly successfully representing the better side of "Merlin". It's nice to feel the anticipation that comes with knowing that an episode of "Merlin" will likely have a significant affect on the status quo. From the rather spoilery episode title, the preview, and the available synopsis, one can extrapolate quite a bit about what's to come, and I'm still feeling generally optimistic. In fact, I would say that my main problem with this episode (if it can even be called a problem) is that it seems very likely that all the best material is being saved for the true finale.