SciFi Vision | All Reviews | Television Reviews | Once Upon a Time 1.16 Review: "Heart of Darkness"

Regular readers know that I have wondered how much latitude the House of Mouse will allow “Once Upon A Time” with its treasured characters. Apparently, the producers aren't unaware of this question. The answer they provide in the opening of “Heart of Darkness” is, quite a lot, thank you very much.
My heart sank, early on, when they recreated the iconic scene of Snow White and the friendly bluebird. It then soared at the reveal that Snow has been transmuted into a cantankerous scold by the potion of forgetting. The show is back to exploring the real-life consequences of fairy-tale tropes. In this case, the need for a dwarfish intervention when a potion takes away all of your heart, not just the bit you intended to excise. The episode’s title invites the presumption that the heart in question will be the Evil Queen's. Instead, it is Snow's in shadow, as she sets out to take her vengeance.

Following the delicious revision of Red Riding Hood, no time is wasted taking advantage of her newly-revealed abilities. Watching her transform to ensure Prince John's escape, it becomes increasingly credible that this rag-tag amalgam of cast-offs could successfully challenge the ruthless royals and wizards who currently hold sway. Unfortunately, the same cannot be said for their counterparts in Storybrooke. 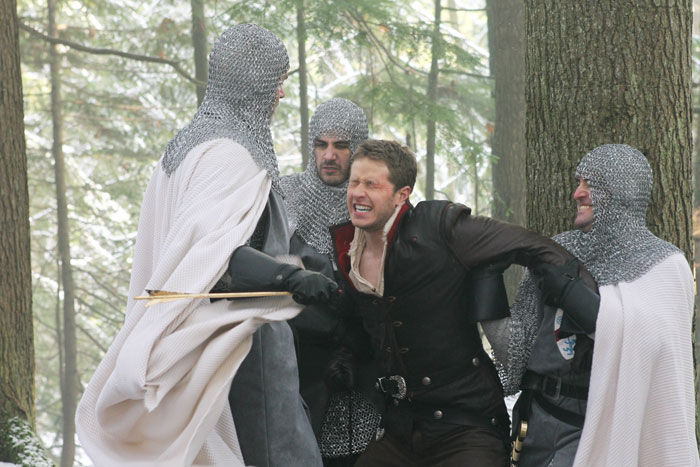 The attempt to railroad Mary Margaret, to borrow Emma's phrase, continues apace. It is helped marginally by the addition of the Mayor and Mr. Gold nipping at the edges. They remind me of two sharks, circling the situation, waiting for the moment of maximum advantage to strike. Much of this episode was setup for the real (fairy-tale world) and purported (Storybrooke) reckonings to come. There was a definite sense of moving pieces into their necessary positions. Even the various pieces of the frame-up felt more than a little pedestrian.

At least, the competing stories are starting to inform each other again. The parallel gifts from Mr. Gold and Rumplestiltskin, given gratis in deference to the “investment” Snow/ Mary Margaret represents are intriguing. It makes me wonder how much of a 'long con' Rumples has been running. Perhaps even his capture by Snow and Charming was a means to his ultimate end.

On a lighter note, it seems Prince John puts as much faith in the power of “True Love's Kiss” as Emma does in her Truth-Sense, and to similar effect. We've now seen it fail against Frederick's gilding and his initial attempt to plant one on Snow. (Not to mention, between this show and "Spartacus", it was a bad week for arrows as instruments of vengeance. Many pincushions, precious few deaths.) However, the Prince is nothing, if not persistent. He prevails in the end, even if the victory turns out to be Pyrrhic.

The remaining notes of dissonance are his Storybrooke analogue, David, who remains annoying and is decidedly not remaining stalwart. (Dude, she has LONG hair in that recovered memory!) Also, the brief scene with August (hmm, a hirsute Observer?) and Henry felt a little too on-the-nose. I may just be annoyed at the tyke for still not leafing through the book and discovering the changes we presume August made.

Overall, this was another solid episode. The show is still on the road to recovery, but it's regained my interest in what's going to happen down that road. After all, how can I not be intrigued by what the SWAD team is going to cook up? (SWAD, you ask? Snow White And Dwarfs, of course!)