SciFi Vision | All Reviews | Television Reviews | The Vampire Diaries 3.17: "Break On Through"

The Vampire Diaries 3.17: "Break On Through"

This episode was off to a rocky start when the writers brought in Sage, who was introduced in the previous episode, and had her interact with the characters as if she had been around the entire season. While it may make sense from the character’s point of view, to some extent, it doesn’t quite mesh and comes across as very jarring. It feels a bit like the Nikki and Paolo issue in the third season of “Lost”, and reminds me all too much of Cassidy Freeman’s abrupt introduction on “Smallville” as well.
It doesn’t help that Sage is effectively introduced and used in ways that make her seem almost overpowered compared to the Originals, and that’s not how it’s supposed to work. It’s often a good idea to bring in a wild card to shake up the status quo, and “The Vampire Diaries” has become almost infamous for how well they pull it off, but Sage’s insertion into the show has been anything but organic. 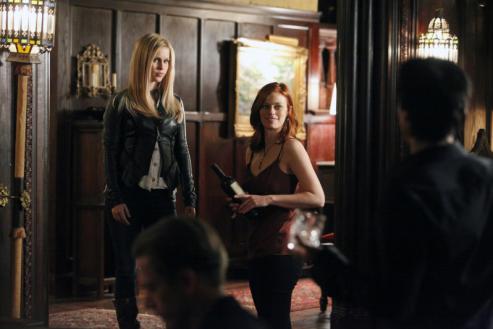 Speaking of Sage, her connection to the Originals, and her plan to work with Damon against Rebekah, there are a ton of questionable writing choices in that plot thread. What exactly prompted Damon to believe that Rebekah was hiding something? Why would Damon involve Sage, if he knew that she could uncover secrets, and she was previously attached to one of the recently exhumed Originals? Far too much of the drama in this episode relied on information and connections that the audience had no opportunity to internalize. (Though the prospect of a Damon/Sage/Rebekah party was momentarily intriguing!)

On the Alaric front, things don’t move too quickly, but there’s a lot of exclusion taking place to clarify the idea. Basically, there is no possession taking place; instead, the more the resurrection rings are used, the more they damage the psyche. Which, of course, also means that giving up the ring doesn’t really solve the problem. Once the process starts, it is going to drive the victim insane. Why it inevitably leads to killing off members of the Founder families still isn’t quite clear, but at least there’s less debate over the nature of the problem.

And it did lead to that scene between Elena and Jeremy at the end of the episode, which was just long and awkward enough that I fully expected those “friends” that Jeremy mentioned to be Alaric, somehow. I get the feeling that something terrible is going to happen to Alaric as a prelude to the gang taking measures to prevent the same fate for Jeremy. It could serve to give Bonnie something to do, since this subplot with her mother did more to give Caroline something to do. Bonnie is still the witch they hold in reserve for convenient plot purposes.

While I normally wouldn’t fault an episode of “The Vampire Diaries” for slowing things down a bit and focusing on some of the running subplots in a little more detail, the biggest problem is that the Sage plot thread felt forced.