This is the kind of episode I was expecting "Alcatraz" to make from the get-go. That it came at the very end of the season (and perhaps, the series) demonstrates how much of a disappointment this whole venture has been. The returning '63 of this week stumped the task force, seemingly for the first time since the pilot episode.
His methodology and motives were kept a mystery to Hauser and company. They actually had to be detectives and follow clues. What happens in the present also connected well to events in the past, where Dr. Sengupta works to "cure" Porter's torturous condition. The good doctor proves useful in the narrative, more so in the past than in the present. Hauser's connection and long-time feelings for the doctor drives the pursuit of Porter and his life-saving blood, though. It all played very effectively throughout the hour.

The fact that Porter's crime was of relatively small stature and less publicized than many of the other inmates in Alcatraz keeps him off the radar. It contributes to how Dr. Soto can't figure out the '63 who has returned to the present until halfway through the episode. The impetus for Porter's crime is understandable in a way, though. It was almost self-defense, as he killed his mother only after his mother tried to drown him. The attempted drowning gives him the tinnitus condition that tortures him and drives his talent for playing beautiful violin music. 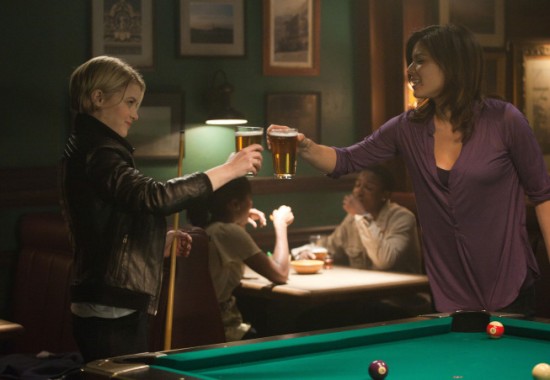 As if to make up for the absence of Soto's right-on-the-money-every-time identification of the criminal, Dr. Sengupta shows a preternatural ability here to precisely diagnose Porter's condition. The warden doesn't put the less-developed techniques of Dr. Beauregard to use here. Instead, he's intrigued by the pretty doctor's more measured approach. Using music and their calming properties helps to calm Porter's mind and get him off the obsessive need to try and overwhelm the constant ringing in his ears. The violin music even serves to calm the raucous general population of the prison!

The ultimate result being that the music now drives Porter's murderous actions in the present. I liked the little unexpected detail that he's collecting all of the hair from the women to string the bows for his violin. It's much more unsettling for Porter to be so calm, to use his beautiful music as a way to get all of the women to let their guard down, then strike once he has his hooks in. His backstory is altogether tragic, and that informs on his personality and the actions he takes in this episode.

Yet another episode goes by and Hauser's team gets upstaged by the returning '63. This episode showed how far out of it they really are, though. That's a bit of a surprise, and frankly, one that the show has needed from the beginning. I kept waiting for Soto's "eureka" moment, and it didn't come until the episode was halfway over. Porter has been in the present for longer amount of time than the other returning criminals, and Detective Madsen makes the correct point that the '63's are making themselves much more comfortable in the present.

This points to a larger danger at work, something that has been absent for the life of the series this season, and adds urgency to the proceedings. If the team has this little information on someone as small-time as Porter, who else in the group of '63's might be out there right now, sitting back and making plans? The episode doesn't answer that question, but the fact remains the show should've put the question out there much earlier. Porter's capture also pays off the colloidal silver "cure" plot point that was introduced in an earlier episode. His blood makes Dr. Banerjee/Sengupta wake up from her months-long coma, and hopefully she will have a more active role in the show's final two episodes than she has in the previous eight.

Madsen and Soto also find out that she's a '63 at the end so that could make them question Hauser about what exactly is going on with this group of people. The show has addressed its hook of people from the past coming to the present in an opaque manner until now. There hasn't been a concrete explanation for why these people are here, or how they come here without having aged. Madsen and Soto now know a key secret that Hauser has been intentionally keeping from them. The next step is to find out why he did that and what else he might be keeping from them. Why it took until the near end of the season to get to that point is a failure on the part of the writers. Where was this kind of quality earlier in the season?