SciFi Vision | All Reviews | Television Reviews | Supernatural 7.16 Review: "Out with the Old"

Supernatural 7.16 Review: "Out with the Old"

With Dean still not sure where his mind is at, and Sam dealing with a very chatty and empowered Lucifer in his head, I suppose that it was the perfect time to revisit the Leviathans and Dick Roman’s plans for the human race. And sure enough, it’s more than just an excuse to find new and hilarious ways to toss out Dick jokes.
If there has been a weakness to this season (a notion that I think is a bit overstated), it has been the Leviathan arc. They are such a powerful adversary, akin to the demons in the first couple seasons, that it’s been hard for them to get involved without massive bloodshed as a result. It was a problem that also plagued the fifth season.

While the writers can’t very well remove the crucial item of the Leviathan’s hatred for the Winchesters, since that’s an important part of the status quo, they have gone a long way towards explaining what the Leviathans are doing with all that political status and public support. They are apparently setting up a research facility devoted to a cure for cancer. 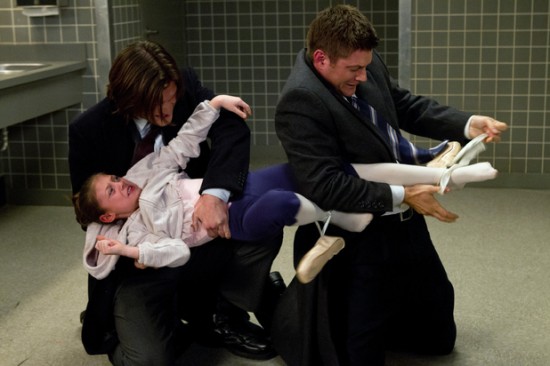 The obvious conclusion one might draw is that the Leviathans are looking for a nice way to control their food supply. Surely the writers are aware of that fact, so there must be something more to such a program. But it does highlight the fact that this is the kind of enemy and plan that Sam and Dean really haven’t dealt with before. And the kind of allies they need to figure out the Leviathans’ plan is in short supply.

I was expecting a more direct exploration of the fallout from the end of the previous episode, but I suppose that seeing Sam breaking down physically from the inability to sleep is more than enough for right now. Sam is being fairly honest with Dean about what’s going on, but given Den’s relatively low-key reaction to it, maybe he’s not quite getting the message. Or this is a more mature and measured version of Dean, which could be more terrifying to contemplate.

Perhaps to keep things from going too dark, too fast, there was a nice bit of dark humor in this episode. Who knew that real estate brokers could go so “Devil Wears Prada” like that? It’s quite on the level of a Ben Edlund episode, but it’s still classic “Supernatural”. Who didn’t want to see what would happen if Dean strapped on the ballet shoes? And Sam can still toss out the one-liners, even when he’s fighting off Head Lucifer. (Though, did anyone else think that line about a lesson in gratitude sounded more like Lucy than Sam?)