“Spartacus” is usually that kind of series that delivers unexpected reversals of fortune, to the point where it becomes almost impossible to imagine that much of an episode would be devoted to a plot device that is so overused as to be laughable. So it’s surprising that the writers would go with something like a “Trojan Horse” scenario, even if they did try to frame it in a way that illuminates Glaber’s character.
Gannicus arrives at the rebel camp with Ilithyia as his prisoner, and the implications are immediately recognized. For Gannicus’ part, he sees it very simply. Since Spartacus is driven largely by a desire for vengeance over his wife’s death, then he can achieve his goals by taking something of equal worth from Glaber. This becomes the basis for the vast majority of the drama for the episode.

On the face of it, it sounds semi-logical, if one assumes that Spartacus is just keeping the fugitives together, forming a rebellion, out of a quest for personal retribution. But it’s shocking that none of the characters raised the most obvious objections to the notion, other than Oenomaus’ point that Gannicus is doing all of this to absolve his own sins.

Even if all things were equal, killing Ilithyia wouldn’t settle accounts. Glaber is not reacting to Spartacus’ undeserved personal vendetta; he has a laundry list of reasons to see that Spartacus and the other fugitives are brought down. Crixus, Oenomaus, and even Gannicus have seen enough to know this firsthand. Beyond that, Glaber and most of the rest of the characters believe Ilithyia is carrying his child. Killing Ilithyia alone might be perceived as equal measure, but killing the unborn child is simple escalation. 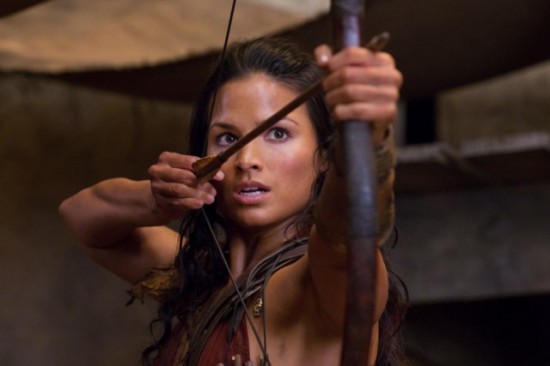 But even if the child wasn’t a consideration, what are the chances that any of the rebels would think that Glaber, as a high-standing member of Roman society with an image problem, might actually consider the matter done if Spartacus kills Ilithyia? Remember, they assume that Ilithyia is still of value to Glaber. If anything, they should assume Glaber would take this as even greater cause for Draconian measures, and that Spartacus’ plan to stand stronger together than alone is really their only chance. It’s already gone too far for them to disperse and survive.

The possibility that “balance” might be found drives the notion of using Ilithyia as a bargaining chip to gain arms and a better sense of Glaber’s intentions. And in the end, was anyone shocked to discover how dedicated Glaber was to seeing Spartacus and his fellow fugitives dead? It all felt contrived to drive home the idea that Ilithyia is utterly expendable. Even Spartacus, the true father of her child, has no desire to protect her.

I can’t see how anyone was shocked when Ashur and his friends came tumbling out of the wagon; if I were Spartacus, that would have been my very first suspicion. (While it’s true he expected betrayal, and was prepared with an escape plan, it still felt naïve on his part to even agree to a face-to-face meeting.) On the other hand, it may have been worth it to have that visual reminder of the strip of Sura’s clothing that Spartacus carried through so much of “Blood and Sand”.

Oddly enough, I think the ending of this episode might just portend well for Ilithyia. We know from history that Glaber, and Virinius soon after, will make their move on Spartacus in the shadow of Vesuvius, and be utterly crushed. Seppia is setting herself up for a fall before much longer, and I’m not even sure Lucretia will make it past this season, as things stand. But the fact that she’s still carrying Spartacus’ child, and there is a very weird chemistry between Spartacus and Ilithyia, makes me wonder if his new tensions with Mira will lead to Ilithyia joining the rebellion for the third season. (Granted, it may be my desire to keep Viva Bianca on my screen driving that notion, but this is a bit of a loose end!)

In the end, while this is merely a prelude to the fateful confrontations to come in the final two episodes of the season, I expected something a bit less obvious in terms of the turnabouts. Some things felt overly contrived to ensure that the points were being made for the audience, and when it comes to this writing staff (and a Whedon, no less), I’ve come to expect more.