I love that this show's plot is so versatile that it will highlight certain characters in one episode, yet that doesn't take away from other characters. Here, Limehouse and Boyd get the spotlight. That doesn't mean Quarles is forgotten. Quarles is now Raylan's primary concern.
Boyd could be a growing threat because he has an asset that the other men do not: Ava. She shows in this episode that she's willing to go down and dirty with anyone if it will benefit Boyd and their operation. That becomes a dangerous and unpredictable variable in this chess game that's inching closer and closer to all-out war. Judging by Boyd's measured, but concerned, response to this new development, there could be repercussions that even a smart man like himself cannot see coming.

It wasn't even like Ava was expected to enter the fight. It was supposed to be this struggle between Quarles, Limehouse, Boyd, and Raylan. When she got involved with Ellen May and Delroy in a previous episode, that viewpoint changed. Ellen May only comes to Ava's doorstep after a botched robbery attempt led to Delroy's decision to kill all witnesses. Ava's not as cold as Boyd, and so she takes care of Ellen May. She understands much about Boyd's business, that Delroy pays for Boyd to protect him, but her compassion gets the best of her. She plays the slimy Delroy, making him think he has the advantage, then turns it against him. 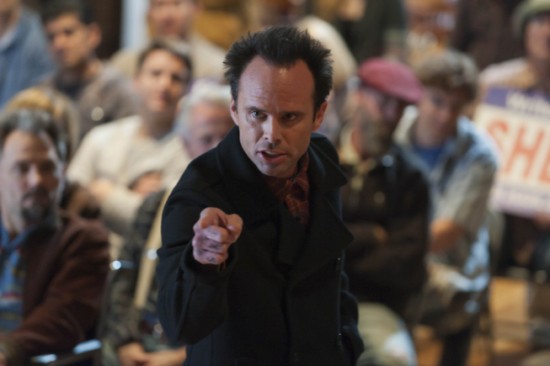 It might upset Boyd, but Delroy had to be eliminated. He was going to be an ongoing problem for them. His death means that Ava takes his place watching over the oxycontin addicts. It firms up Boyd's business ventures and ensures that the Crowders have some small foothold in Harlan if things go bad. After Boyd's admittedly magnetic speech that eviscerates any argument Sheriff Napier has in reclaiming his office, he still remains a major player in the region. Boyd's concern seems to be that Ava didn't come to him when the Delroy problem cropped up. Ava and Boyd have been functioning well as a unit lately, but this could be the first of many disagreements. If that ends up being the case, Ava might well regret killing Delroy because he was going to murder Ellen May in cold blood.

It was necessary for Boyd to root out bad elements like Sheriff Napier. Since he's being paid off by Quarles, there's no loyalty going on within the organization so he's free to take out Tanner Dodd. Raylan correctly surmises that he needs Dodd to get closer to catching (or at least get more information on) Quarles. The plot connects with Limehouse's side of things, as his underling has to make sure there are no connections to their organization. Dodd's dalliance with a bomb-maker leads to his predicament. I knew he was walking into a trap the minute the bomb-maker was too casual about their conversation. I also knew Dodd was never leaving that place alive once he stepped on the arming mechanism. The bomb almost took Limehouse's subordinate, then the bomb technician and Raylan with it.

In the end, only Dodd lost his life, though not before he could tell Raylan anything useful about Quarles' operation. So Raylan is now back to square one on his investigation. He would do well to press on Limehouse's connection to Quarles, even though he doesn't have much evidence to stamp out the connection right now. Only a suspicion, and we know Raylan isn't usually wrong with his hunches. Art told him to back off of Quarles so he might single-handedly start the war by threatening every antagonist he meets. He's right. The war is coming, and there is a strong possibility that Raylan will leave a lot of bodies in his wake to pursue either Quarles or Limehouse or even the both of them.