"The Hunter's Heart" is a fairly good representation of "Merlin's" typical approach to blending an episodic story with the needs of an over-arching story, with the larger story taking a slightly heavier priority in this season than in any previous one. Most of the time, I've felt that the episodic storytelling detracts from the show's attempts to tell a serialized story, and that the connection between the two story layers was disappointingly thin. But at least in this case, the merger of the two stories feels relatively organic.
I just wish "Merlin" could learn how to weave its story threads more naturally across multiple episodes. It's always obvious that most episodes are planned with the episodic story in mind first, and then awkwardly forced into the context of the larger arcs. I don't know if this is how it's done over on "Supernatural", but somehow the results over there seem vastly superior to "Merlin's" attempts. "Merlin" writer Howard Overman did put forth a pretty respectable effort at trying to make "A Herald of the New Age" work (though there was still plenty of room for improvement). So maybe it's not that this approach to planning the episodes is bad, but more that the episode writers usually aren't up to the task. 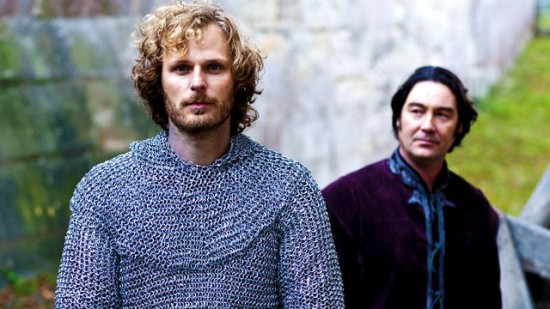 This episode makes a few important advancements that were needed to set up the finale. And though my subsequent level of anticipation isn't as high as I hoped it would be, "The Hunter's Heart" achieves its intended goals and contains a number of interesting individual pieces, most of which I would probably have appreciated more in a different context, such as the unexpectedly classy Southron leader, the bitter irony of Morgana's method of attempting to be rid of Gwen, the further hinting that Agravaine is beginning to resent Morgana's treatment of him, and, of course, the Princess Mithian.

It would have been all too typical (particularly for this show) for Mithian to be despicable, ugly, an enchantress, or simply not what she appears to be. I still think that it's a bit early for Arthur to be falling so readily for someone other than Guinevere, but I very much liked the choice of making Mithian a very decent, kind, and even likable person. Mithian would probably have made a great queen for Arthur. The story works best with Mithian as a believable threat to Gwen's place in Arthur's heart. Though it doesn't take much to remind Arthur that he's really not over Gwen, even knowing what she did. And after inevitably discovering that Gwen never actually did anything of her own free will, he'll be glad that he made the choice that he did.

I like seeing Arthur more and more commonly acknowledging that Merlin is wise, as well as a true and loyal friend. Obviously, I'd prefer to see a lot more development of Merlin in this capacity, in a way that abandons the image of Merlin as a buffoon and a klutz, but this is still a very significant improvement on how the show (and, by extension, Arthur) has treated Merlin in the past. If Merlin's powers are to remain a secret from Arthur (which I fear will be the case until the final season or final episode of the show), then I'd at least like to see him take on a Gaius-like role at some point, becoming a highly respected counselor and physician of the court (still as Arthur's best friend, of course). "Lamia" was a notable episode that seemed to strongly hint at this possibility (yet another sad reminder that Gaius won't be around forever).

"The Hunter's Heart" is sufficient as set-up for the two-part finale. The episodic story was slightly above-average, but as a piece of the overall season story, it's underwhelming. Helios is mildly interesting for being more than just a simple barbarian, but his purpose in the story is overly conventional. Morgana is always trying to make allies and use them against Camelot. I suspect that I'll enjoy the finale more than most of the season since the two-part premiere. But the episode still accomplished fairly little for the amount of running time it had.