SciFi Vision | All Reviews | Television Reviews | Ringer 1.17 Review: "What We Have Is Worth the Pain"

Apparently, Siobhan's goal now is to get Andrew to kill her sister and then she can go to the police or the SEC to expose his business Ponzi scheme, make sure he's in prison, then run off to happiness with Henry. At least, I think that's what her plan is. It changes on the fly so often and is dependent on a lot of contrivances to move from point to point.
This is the consequence of Siobhan's unwillingness to be active in her own plan. She hatches it, puts it in motion (by "killing herself" in the pilot so that Bridget takes her place), then sits back to see it go through. It's only when a myriad of problems crops up that she steps in to take some kind of action.

The big problem for me as a viewer is that I'm still having a hard time caring what happens to Siobhan, or any character on this series. She may be the "evil" twin in this instance, but her plan is so far-fetched and so complicated that I don't see what ending could be satisfying enough to warrant everything that's happening on the show. Bridget is still determined to find out who is trying to kill her, yet is only concerned in this episode about finding Malcolm, who has gone missing after playing a big role in the previous episode. 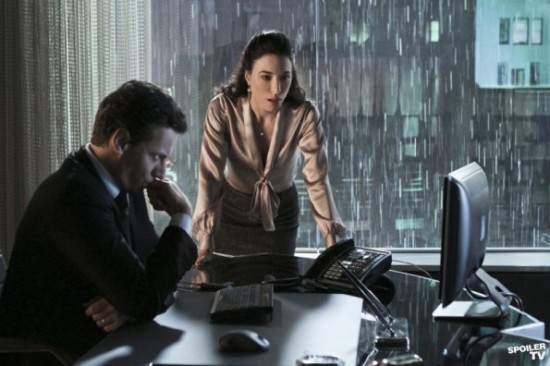 That coincides with Agent Machado's actions here, as Malcolm did tell him that he's going to press charges against Bodaway Macawi, and now he's nowhere to be found. Andrew can't even be counted on to maintain a consistent personality, which has been true ever since it was revealed that he went along with the Ponzi scheme. He is filmed in the usual cliches that scream "evil" sometimes (coming out of shadows, threatening to kill people, staring at people with a dead-eye glare), and then there were scenes where he looks bewildered. That was in part because he threatens Bridget-as-Siobhan, then has an argument with the real Siobhan.

I don't know if the writers really want any of this to make sense. The easiest solution for Siobhan to take might be to go to the police or the SEC, tell them what Andrew is doing, then take as much money as she can to get away. It's not the most dramatic or glamorous solution, but it's the most pragmatic. Of course, Siobhan hasn't been presented as the most pragmatic thinker in this world. Andrew was supposed to try and kill Bridget. He ended up taking a bullet. Does that prove he loves Siobhan? Is Bridget coming closer to telling him who she really is?

That's for future episodes, it seems. The show has become so plot-driven that when it tries to shock, it often fizzles out. There's very little mystery behind everything, even though it's been presented as a mystery all season. What is sacrificed becomes the characters, all of whom are still thinly-drawn. To have this occur so late in the season makes the whole enterprise feel like a waste.

Take what happens in the episode's other subplot, which involves Juliet. When she meets this new guy in front of a hotel elevator, it didn't feel like a chance meeting. Aside from his ridiculous tattoo, the bloody fist was a dead giveaway to me that he was the guy who worked with Catherine to intimidate Tessa. He said he put his fist in a wall, and it surely came to pass when Juliet confronted her mother about the guy and sees the hole he made on her hotel room wall.

Juliet makes the connection right then and there (though the show had to make sure the audience got it as well with a quick, and annoying, flashback), and walks away from her mother. I suspect this isn't the last we've seen of Catherine or this now-directionless subplot. Those little flashback snippets are an integral part of the show now, and they demonstrate the writers' alarming disregard for a viewer's collective intelligence. Some of the flashbacks are even repetitive. It showed a conversation between Andrew and Siobhan, then immediately had a scene where Henry listened to a recording of the same conversation!

How can one invest in what happens on the show if the writers don't trust that the viewer will understand what is happening onscreen? It's just piling on the frustration I have with this show at this point in time.