The mystery of who might be running around Mystic Falls, taking out members of the founding families, has been percolating in the background for a little while now. All of the evidence seemed to point away from Alaric, and instead to someone trying to frame him. The truth, instead, is a lot stranger.
It turns out that Alaric is the killer. At least, on some level, because the ring that he wears (and has resurrected him more times than Rory Williams) was also once worn by one of Elena’s ancestors (on the Gilbert side). She was killed and resurrected too many times to count as well, and it slowly but surely drove her insane. Either this is the side effect of the ring being used so many times, or Alaric himself is being possessed by the lingering shadow of the original Founder killer.

During the recent hiatus, there was a great deal of speculation due to the casting of Matt Davis, the actor who plays Alaric, on a pilot for the CW network. One wondered if the constant hints about the diminishing utility of the ring would eventually lead to a failed resurrection. The answer may be more tragic by far. If Alaric retains (or regains) enough of his own sanity to recognize the threat he has become, he’s the kind of heroic character that could sacrifice himself for the greater good. 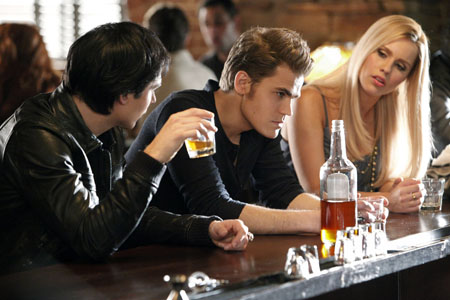 It’s a loss that would be crushing for Elena, especially given how things have progressed this season. With Stefan all over the map, and Damon being his usual insufferable self (and thank goodness for that!), Elena is left with few shoulders for crying purposes. (Well, there’s Matt, but he’s the very definition of a character in desperate need of a purpose.) That’s actually to the benefit of the episode, because a lot of the weight was carried by the unusual relationship of the Brothers Salvatore.

Taken in chronological context, it has always been interesting to see how Damon and Stefan changed over time. Damon was originally the one less inclined to drink from humans, but key relationships (including the one with Sage) turned him into the casual killer that we all remember from the first season. And we knew Stefan carried guilt for his time as the Ripper, but it wasn’t clear when things began or how.

It makes sense that Damon would want to help make amends for his role in unleashing the Ripper by helping Stefan work through his blood addiction 100 years later, given how he’s been forced to examine his own choices and actions. His idea of a vampiric 12-step program leaves a bit to be desired, but it’s still compelling to see Damon and Stefan spar on so many levels.

This is the strength of “The Vampire Diaries”. Beyond the frenetic pacing, which ensures that something important happens each and every episode, the majority of the characters are layered enough to keep up the quality throughout. Like many shows that have a premise that might otherwise inspire ridicule, great characters can make up a lot of that ground.