The most troubling thought I had while watching this episode of "Alcatraz" was that the guest star playing the Criminal of The Week was far more interesting than the main cast. This has been the case for much of the show's admittedly uneven season thus far, but it particularly stood out to me here. The show's writers can't seem to find much variety from the norm here, as Clarence Montgomery apparently keeps committing murder in the same fashion as he did in the past. It's consistent with all the other criminals from 1963 who have come forward to the future, but there is still no explanation for why they are acting in this manner. I fear we may never get that explanation with the show running so close to the end.
The episode begins with Montgomery seemingly murdering a pretty girl at a country club and positioning her dead body like the girl he killed in a similar fashion back in the '50's. Yet again, this gets Dr. Soto's attention, and it's become something of a running joke as to how quickly the Doc figures out just the right criminal based on the crime in question. But the way the scene is edited, I had some doubt as to whether Clarence actually committed the murder. Did he black out? There had to be something going on that the episode isn't willing to initially reveal.

This does add some credence to the theory that something unseen might be controlling the 63's when they return to the present day. The plot then strangely undercuts itself when both the team and Clarence accept that he was responsible for both murders in the present. Clarence maintains that he never committed the original murder for which he was sent to Alcatraz back in the '60's. That fact is corroborated by Emmitt, one of Clarence's former inmates at Alcatraz. I never thought Emmitt was capable of the murders, but the character is a good way to establish Clarence's backstory. 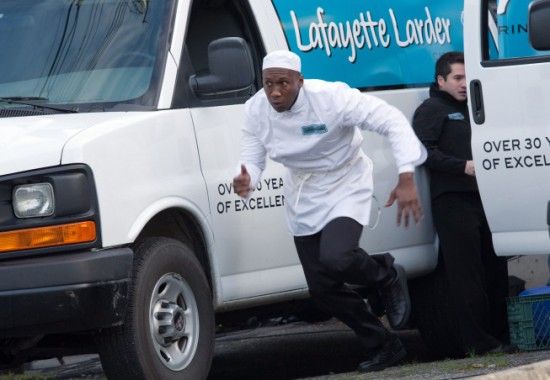 I thought the flashbacks to 1960 were really one-note until the last few moments. Clarence mopes around Alcatraz claiming he was innocent of killing his lover. He apparently has a special talent for cooking Southern food, and Assistant Warden James takes advantage of this talent by having him cook a big meal for everyone in the prison. Only, when it comes time for the meal, racial tensions arise from the inmates and it all goes to waste. Warden James' interest in Clarence means he has an ulterior motive, and that's to have Clarence brainwashed into thinking that he was guilty of the murder when actually, he was entirely innocent.

Dr. Beauregard's brainwashing technique opens up a number of questions about what happened to the 63s in the past. Was it used on anyone else in the prison? If so, who? How does this brainwashing connect to why the '63s are all returning to the present? The show wants to dole out these kinds of questions as a way to increase the mystery, but it's all so shallow. I never get the sense that there's a clear, larger plan at work.

Clarence's story ultimately ends up an ironic tragedy, as his guilt over the murders in the present day has him forcing Emmitt to kill him instead of seeking out the actual killer of his lover. He never would have ended up in Alcatraz and brainwashed if it was proven he was innocent in the first place. The episode sort of avoids the overt racism that existed 50 years ago as being a deciding factor in Montgomery's conviction. It's also been established that Hauser needs the 63's to remain alive so that he can collect them for his hidden prison. But Hauser doesn't react much to Clarence's death and seems to want to move on to the next case. Was Clarence unnecessary to Hauser's plans? Was his death unavoidable? These questions have no answer so it leaves the episode, for the most part, an exercise in frustration.