Advance Preview: The Walking Dead Returns with Scares and Thrills

Sunday an all-new episode of The Walking Dead premieres on AMC. The episode, entitled “Squeeze,” picks up where the story last left off: Daryl (Norman Reedus), Carol (Melissa McBride), Aaron (Ross Marquand), Magna (Nadia Hilker), Connie (Lauren Ridloff), Kelly (Angel Theory), and Jerry (Cooper Andrews) have been led into a trap by Alpha (Samantha Morton) and the Whisperers and are now in the cave in the middle of the horde of walkers with no apparent way out. Daryl and the others must find a safe escape route while not only dodging walkers, but also a potential cave in.

Meanwhile, in the second episode, “Stalker,” who’s side is Gamma (Thora Birch) really on? Can she convince Gabriel (Seth Gilliam) and Rosita (Christian Serratos) that she’s done with Alpha? Alexandria also faces another threat when they are infiltrated while the gates are left unguarded. 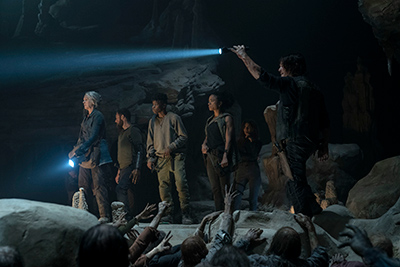 The Walking Dead is really back with a bang in the first two episodes. Feeling at times like a well-done horror film, both episodes are quite suspenseful with quick pacing. The mid-season premiere also has an added claustrophobic feel as the group looks for a path out of the caves. The close quarters make it harrowing, as one wrong step could cause a bite or a fall.

One of the things I most enjoyed about the first episode, however, was the quieter moments with Carol and Daryl, who are my favorites on the show. Carol has once again put everyone in danger with Daryl left to save the day. Their conversations are very emotional, and Reedus and McBride are always such a joy to see together on screen. Carol also reaches a point that I’m not sure how easy it will be to come back from.

There was also a bit going on at Alpha’s camp, with some unexpected consequences for Negan (Jeffrey Dean Morgan). I truly hope that he’s only biding his time to strike, but with him, you never know. The one scene is so bizarre, it will definitely have fans talking on Monday.

The second episode is no less thrilling, as a threat comes calling in Alexandria to stalk their prey. There’s a lot of tension with Gabriel and Rosita interrogating Gamma. The two definitely are each dealing with things in a different way, as Rosita still mourns the loss of Siddiq (Avi Nash). 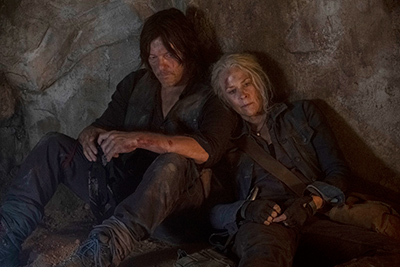 I especially liked Gamma’s interactions with Beta (Ryan Hurst) in the episode, when she makes a choice and proves which side she’s really on. Seeing Judith (Cailey Fleming)’s reactions to the action, as well as kicking some ass of her own, was also exciting to watch.

My favorite part of the second episode, however, was Alpha and Daryl’s game of cat and mouse. It was extremely tense, and I was unsure what was going to happen from one minute to the next. The resolution was also as unexpected as it was something to think about.

The mid-season premiere and subsequent episode are on par with some of the best. The overall atmosphere and scares will keep you on the edge of your seat, while the characters will have you engrossed and wanting to know what happens next.
Twitter
BotonSocial por: SocialEmpresa
Category: TV Reviews & Recaps