SciFi Vision | All Reviews | Television Reviews | Advance Preview: Doctor Who - The Haunting of Villa Diodati is More Than a Ghost Story

Advance Preview: Doctor Who - The Haunting of Villa Diodati is More Than a Ghost Story

In tonight’s all-new episode of Doctor Who on BBC America, “The Haunting of Villa Diodati,” written by Maxine Alderton and directed by Emma Sullivan, the Doctor (Jodie Whittaker) and her companions, Ryan (Tosin Cole), Yaz (Mandip Gill), and Graham (Bradley Walsh), arrive at the villa on Lake Geneva in 1816. The plan is to spend some time with the literary greats on the night that Mary Shelley was inspired to write Frankenstein. However, as they spin some scary tales the group ends up in the middle of a real ghost story. They must not only work together to escape, but the Doctor must make a choice that could affect all of humanity’s future. 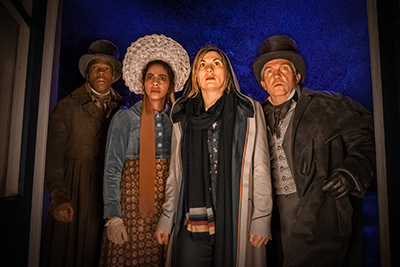 I think the idea of the episode was fun as they arrived on a dark and stormy night with the instructions not to mention Frankenstein or to snog Lord Byron. Doctor Who does period pieces well. The sets and costumes were spot on and fit the spooky atmosphere, as were a few props which played an important role.

One of the things I was really pleased with about the episode, is that each companion had things to do this time, and they didn’t get left behind. Also, their unique personalities and reactions to their experiences kept it interesting.

The 1816 cast was well chosen. I especially liked Lord Byron (Jacob Collins-Levy), most notably in his flirty conversations with the Doctor. 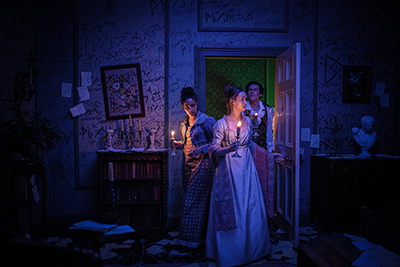 The tone of the episode worked in an interesting way, as it played really well as an alien-of-the-week, but it also contained mythology. There was what I assume was meant to be a surprise in the episode, which I won’t spoil, but unfortunately, it seemed fairly predictable to me, knowing what is likely coming in the two-part season finale. I’m not sure what other viewers thought. It didn’t, however, make the episode any less enjoyable. I was happy that the story did change up some elements of what was expected. It also served as an excellent way to connect things from earlier in the season.

There were also some emotional scenes towards the end in which I appreciated the Doctor’s speech about making the hard decisions that her team often take for granted. Being the Doctor is never easy.

Gearing up for the finale, I like how the episode sets it up, and I can’t wait until next week.
Twitter
BotonSocial por: SocialEmpresa
Category: TV Reviews & Recaps