SciFi Vision | All Reviews | Television Reviews | The Good Wife 3.16 Review: "After the Fall"

When Will took his punishment from the bar association, I was kind of expecting for him to miss the work and be one of those guys who couldn't function unless he was working. This episode makes a lot of hay out of that situation, sometimes amusingly so when it involves his two older sisters meddling into his affairs. Diane and her handling of the firm with Will out of the picture (temporarily?) then suddenly comes into sharp focus.
While the various power play interludes draw viewer interest at first, it becomes ridiculous when it's repeated so many times as the episode unfolds. The power vacuum at the top also affects the mentor-student relationship that has been cultivated between Alicia and Caitlin throughout the season. Some of the looks of concern and tones of certain scenes would intimate that Caitlin may displace Alicia within the firm, and the episode doesn't really go through with all of it. It feels like setup for future events as the season heads down the final stretch.

The overall darker tone of the episode was set by the Case of The Week, which involved a filmmaker advocating suicide through an elegant documentary and they are trying to find the real culprit for this one girl's suicide. Alicia takes the case, with Will giving notes on it from his opulent Chicago apartment instead of at the office. It gives the show the opportunity to have her face off with Nancy Crozier, the weird and ditzy blonde attorney who pops up a couple of times a season. The judge presiding over the case seems to take a liking to pretty blondes so it looked like Alicia was slowly losing the case. Until Alicia makes the smart decision to get Caitlin on the case. 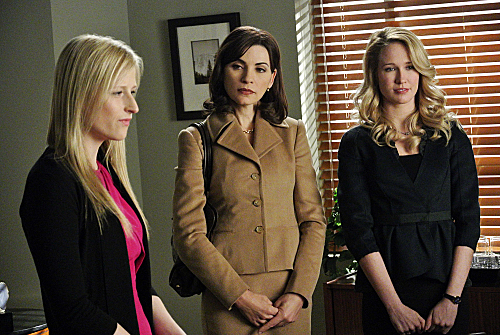 The show likes to play around with the strange idiosyncracies of the judges in its cases, and this one particularly felt egregious when it showed that Nancy had lost some of her charm with an equally attractive blonde in the same court. Caitlin performs well in court, and that leads to Diane giving her a much larger role at the firm in Will's absence. She makes it sound that way when she tells Alicia of the change, but the way the music scored that scene and the camera lingering on Alicia's irked look might hint at something else in the works. This easily could have been a great treatise on how the women of the firm are now the power brokers in a traditionally male-dominated profession, but that scene as well as the final one with Alicia seeing Caitlin enter her new office from a distance suggests that it might result in in-fighting. It would be disappointing if the show takes that track.

At least the show hints at the possible chaotic in-fighting amongst the women. They outright put the various power plays made by the partners right in the open. Julius, Eli, and David Lee make their own overtures towards Diane to fill the power vacuum left by Will's departure. Julius' conversation with Diane was my favorite of the three, simply because he makes the most salient points with his work and how Will's clients might not feel the same way about Will when he returns from his suspension. He's thinking of the best interests for the firm in addition to furthering his own interests.

Eli is a character in flux, what with his nascent gubernatorial campaign for Peter that might not go anywhere. With Peter manipulating the structure of the State's Attorney's Office in order to gain favor with the Democratic Party, he doesn't seem as sure of a candidate as he was when he was running for election last season. If that is abruptly cut off for some reason, Eli throwing his hat in the ring for the top of Diane's firm keeps him in the central narrative. It's direct threats with Eli, with him telling Diane that he can wrangle the votes to override her. David Lee comes off as the scheming villain, playing off his disdain for being management, but not really hiding his duplicitous nature and his constant thirst for power.

All of this might have worked if the show had played it in the background of future episodes, but it felt repetitive to clump it together here, especially with every guy staring ominously into a particular office to worry about what's being discussed. The series has been known for its subtlety, and it was really odd to see everything so upfront and in the open. It was stopped a little bit by Will's brief entrance back to the firm (to get away from his pestering sisters who were a small delight in this episode), but he can't do this every day for the next six months. Diane needs to fill this power vacuum quickly, and she knows it.

I see chaos reigning over in Lockhart and Associates as the season winds down. Will's suspension has left an opening to be exploited by any and all interested parties. The instability at the firm could affect the trying of cases and the lawyers who are working those cases, especially Alicia. If Diane sees Alicia being overwhelmed, she might pull a surprise and fast-track Alicia to name partner. The men who were vying for Will's former position at the top would certainly not take kindly to being passed over by a third-year associate, further complicating a situation that could get very much out of hand. A steadying force is needed right now and I don't really know if Diane can find it in time. What an effect Will's departure has had on things.