SciFi Vision | All Reviews | Television Reviews | Being Human (US) 2.8 Review: "I've Got You Under My Skin"

Things continue to march along their dark little paths in this latest episode of “Being Human”, and I couldn’t be happier. What makes it work is the relatively tight continuity; everything that happens in this episode ties back into elements that were introduced earlier in the season. That makes the drama a lot more involving, to say the least.
While I’m not surprised, I’m a little disappointed with Nora’s absence. This is one instance where I was hoping they would prove me wrong. With the wolf taking hold, Nora is one sexy beast, and I want to see Josh deal with the struggle between his desires and his morality. With five episodes to go in the season, there’s still plenty of time for that, so perhaps this is for the best.

After all, it’s not like Josh is completely back on the mend. He’s still dealing with the consequences of his choices, if mostly internally. And it’s just in time for his wild child of a younger sister, Emma, to come along and play matchmaker. Julia represents a completely different kind of temptation, closer to what Aidan has been dealing with. Josh is vulnerable, and it’s all too easy to contemplate what might have been. In the end, of course, he’s changed, and the violence inside of him can’t be ignored.

Meanwhile, Aidan must deal with the little “orphan” problem that has been lingering out there for a while, and Henry is a part of it. Suren is back in the picture after a brief absence, and she looks to be more composed than in the recent past. I assume that getting a regular fix of human blood has stabilized her somewhat. And only “somewhat”, because she is still unhinged, as her delight over the prospect of skinning Henry alive is rather chilling. 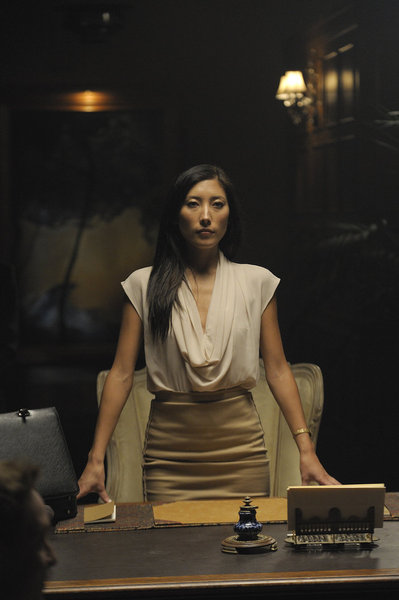 Aidan looks well and truly caught in the web that Mother has spun. Whatever hope he might have had for controlling Suren has pretty much done out the window, and he’s dealing with a relapse of addiction to human blood on top of it all. He has dedicated himself to saving Henry, which is honorable, but deep down, he’s knows it is a mistake. Does he have something of a subconscious death wish?

As foreseen, Sally has found herself in a rather dark reboot of “Dead Like Me”, with the Reaper looking to apprentice her, so he can find rest and be replaced. This is after Sally failed to take out the Reaper, on Aidan’s advice, which only made it that much harder on her. I’m beginning to wonder if the Reaper is telling Sally the truth about her situation, because it seems to me that she is being groomed to do precisely what other ghosts are being “reaped” for.

Even if there are questions surrounding the Reaper, I love this idea of Sally atoning for her bad decisions this season by becoming a force to stop other ghosts from doing the same. From a storytelling point of view, it neatly sets up a situation akin to Aidan and Josh. All of them are now working “within the system”, to some degree or another, to mitigate the damage done by others of their kind who give in to their temptations.

Thematically, this has been an amazingly consistent season. In fact, I’d say that about nearly every aspect of the show right now. It certainly hasn’t fallen prey to the sophomore slump that other shows have experienced, and I personally feel that it’s outshining the fourth series of the British original by a mile.