I hadn't really realized until just this episode how much of a chore it's become for me to watch "The Walking Dead". Anymore, my appreciation of the show seems to be more a matter of begrudging respect than actual enjoyment. I tried to ask myself why this was, but the answers didn't come easily. What next came to mind was the realization that this has been the case for much longer than I would previously have been able to admit. "The Walking Dead" has coasted for a long time the sheer novelty of being a well-produced TV zombie saga. But does that mean that "The Walking Dead" is bad?
Not exactly. I knew from the start that the human drama would play a very significant role in the storytelling; even to the point that the zombies become more of a backdrop to said drama. I knew this because "The Walking Dead" was set to air on AMC, a channel known for its emphasis on gritty, character-driven shows. And I knew this because a friend and fan of the comics indicated as much in the lead-up to the show's premiere. This didn't bother me. I've liked plenty of dark dramas with morally ambiguous characters before. But there was one thing that nearly all of these shows had in common: sympathetic characters.

One need not necessarily like the characters that they watch onscreen (though that certainly helps), but at the very least, they do need to care about them enough to want to keep tuning in each week to see what happens to them. "Lost" wasn't just a success because of its addictive sense of mystery. That was undoubtedly a large part of the appeal, but all of that would have gone to waste if the characters hadn't been as engaging, sympathetic, and memorable as they were. This is something that "The Walking Dead" has always struggled with, and it may lie close to the heart of my inability to enjoy the show as much as I wish that I could.

For the most part, I have found it quite hard to actually sympathize with the characters on "The Walking Dead". They're often either outright despicable or so erratic in behavior that it's simply hard to get inside their heads and see them as real people with real motivations. It doesn't help that the writing and acting sometimes just falls flat on its face. But there are deeper problems in the overall approach to how the characters are written. And all of these problems have seemingly been amplified in the second season as the characters all spiral deeper and deeper into depression, nihilism, and moral depravity. But this is nothing new for dark dramas. "Battlestar Galactica" delivered plenty of similar material during its time, and still managed to make us care about what happened to the characters. The same simply cannot be said for "The Walking Dead". 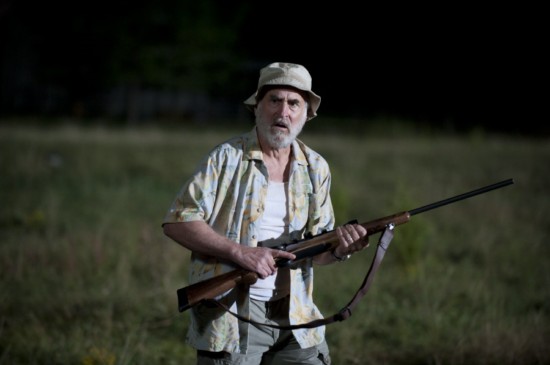 The big theme of the season seems to be the struggle to maintain one's humanity in the struggle for survival in this new world. All of this has come to a head in the most recent episode "Judge, Jury, Executioner", as Dale finds himself pitted against virtually the entire group over the decision of whether or not to kill their prisoner, Randall, over fears that he poses a threat to the camp. Of all the characters, Dale was probably the one I retrained the most sympathy for. Whether his stubborn refusal to abandon the principles of civilized humanity was naive or not, I can't be sure. The situation is fictional, and can reward or punish whomever the writers decide to punish. But if this were a real situation, I would most likely have been on Dale's side.

Dale has never really lived up to his potential as a character. He can often be a bit annoying, arrogant, or foolish. But I've still always found him to be one of the more likable and sympathetic characters on he show, and probably the one that I could relate to more than any other. "Judge, Jury, Executioner" spent most of its running time reminding me of all the reasons why I like Dale, and of all the reasons why the other characters are all becoming so loathsome. I've long suspected that Dale's death was imminent, given how "in over his head" he's been in dealing with Shane. And this episode seemed to strongly telegraph his death throughout. Dale's comment about not wanting to live in this kind of world seemed to seal his fate.

And yet his death still came as quite a shock. I really don't think that there's been a more disturbing or unpleasant scene in the entire show, thus far. It seems beyond cruel of the show to gruesomely kill off the sole remaining voice of sanity in an increasingly barbaric world. Dale was more of an intellectual than the rest of the group. He may not have had the perspective to see the practicality of killing Randall in the interest of self-defense, but he did have the perspective to see the much bigger picture of man's history of development from its primitive beginnings to the more morally just world that we live in today. Not a perfect world, but one that is generally much, much better for the individual to live in. Sure, killing Randall might make things easier in the short term, but it sets a terrible precedent for any future attempts to rebuild society.

"The Walking Dead" is an exercise in bleakness, and in that respect, it's a tremendously effective show. As I said before, I retain a begrudging respect for "The Walking Dead", even if I care little about what happens to its surviving characters. It's difficult not to admire the lengths that this show will go to, the lines that it will cross, in the name of depicting an unrelentingly harsh world in which hope is all but forgotten and virtually anyone can die a horrible, gruesome death. There's intelligence in the crafting of "The Walking Dead". But with Dale's death, the show comes closer than ever before to outright "darkness-induced audience apathy", at least as far as this writer is concerned. Even "Game of Thrones", as grim and vicious as it is, has a wealth of wonderful characters who succeed at engendering my sympathies. But "The Walking Dead" barely even registers in that regard.

So what does that say for the actual quality of the current episode? Where does objective quality and personal taste meet? "Judge, Jury, Executioner" generally succeeds at what it attempts to do. It presents a hopeless battle between two opposing philosophical sides (with Dale giving a surprisingly impassioned argument), and it ends with an absolute shocker of a scene in which a regular character first has his chest ripped open by a Walker, and then has to be put down by Daryl when Rick can't bring himself to do the deed himself. The episode is heavily geared towards setting up that final scene, which is not nearly as sad as it is shocking and repulsive. It is an effecting scene, and represents much of what is impressive about "The Walking Dead". But it also may mean the death of much of my interest in the show.