On the heels of the previous episode’s fiery and bloody massacre, marking the apparent mid-point of the season thus far, it makes sense to take a step back and explore the depths of the fallout. In the process, the writers remind us of the cardinal rule of the “Spartacus” franchise: underneath all the sex and violence, the strength of the series is the character development.
The fugitives have regrouped at the foot of Mount Vesuvius, but they are anything but united. Gannicus proves to be a bit of a problem for Spartacus. While he seemed to have everyone on the same page leading up to the rescue of Naevia and then Crixus, he has also just given the Romans an excuse to take them more seriously. Gannicus feeds into that fear by pointing out all the reasons why the current fugitive forces are woefully outnumbered and outmatched.

It doesn’t help that Gannicus is reeling from what he perceives to be the proof of his freedom, and he wasn’t exactly set to clear purpose before the incident in the arena. He turns that inner despair outward, and all that does is feed into the anxiety that the other fugitives are barely containing. When crucial supplies and information go missing, it seems inevitable that Spartacus and Gannicus would end up in a melee. (And who wasn’t looking forward to that?) 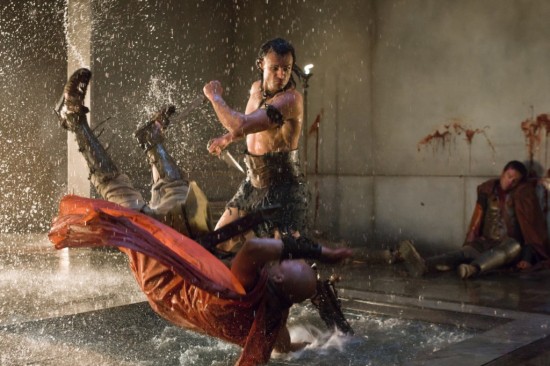 That it turned out to be the body slave that was so desperate to find a “place in this world” made perfect sense. As compelling as the yearn to be free might be for many, it can be terrifying for others to lose their sense of purpose. And it’s a reminder that the opportunities afforded by freedom can be elusive to those who don’t already possess means to capitalize on them. For the former gladiators, they have combat skills, while others discover skills of their own (like Mira). But even then, we know that history does not favor their endeavors for more than a few years, and the rebellion never gains a sense of peace.

Crixus also finds himself at a bit of a crossroads, as his reunion with Neavia turns out to be anything but joyous. While Neavia is happy to see him alive, she is haunted by the memories at her mistreatment by the Romans, and looks to be on the verge of suicide. This would all be a lot more involving if it hadn’t been for the change in actress; Cynthia Addai-Robinson continues to struggle. Part of the issue is that Neavia is hardly the strongest character at this point, and for good reason, but Addai-Robinson does little to draw us into her plight.

Meanwhile, as history dictates, Glaber responds to his continued lack of success by recruiting a larger force. Within the context of the show, of course, it’s also a response to the razing of the arena and his newfound ruthlessness, thanks to Ilithyia’s bid to dissolve their marriage. While Ilithyia’s renewed “friendship” with Lucretia should prove interesting, to say the least, she’s still reeling from her husband’s new attitude. (Seppia might want to watch her back!)

Glaber’s new strategy begets opportunity from Ashur’s point of view, and he certainly takes as much as he can out of the situation. His treatment of Lucretia was all too expected, as was his delight in being unleashed on Seppius and his guards. This pays off, to some small extent, what has previously been a poor showing for Seppius. While I still question his prominence earlier in the season, relative to his importance at this stage (or rather, that of the forces under his control), at least it paid off in the end.

Given that the previous episode took the season to the next level, the aftermath could have been disappointing. Instead, it just took all of the intrigues that were set up in the first half of the season and placed them in a more meaningful context. The end result not only provides hope for a rousing run to the end of the season, but also elevates all that has come before.