The biggest problem with “Alcatraz”, from my point of view, is the repetitive nature of the premise. We all know how things are going to play out: one (or more) of the 63’s will return, they will start killing people in roughly the same fashion as the methods that led to their incarceration, Rebecca and Diego will lead the hunt that eventually leads to the capture or demise of the main subject. The rest is just variations on a theme.
This is precisely the kind of formulaic approach that has made it hard for me to appreciate procedurals. I understand that there is a segment of the population that enjoys a show that doesn’t demand too much from the audience: you can turn on any episode, you know what to expect, and that’s precisely what you get. But there’s such a glut of them that it’s become standard practice to push certain elements to stand out, particularly sex and violence. (Think “Criminal Minds” and “CSI: Miami”, as two examples that come immediately to mind.)

“Alcatraz” isn’t designed for the sex part, but it definitely goes with the violence. This episode is a particularly nasty example, but all of the criminals have been fairly murderous thus far. But the central premise is such that this is not necessarily logical. As I’ve said on the Critical Myth Podcast, no matter how sociopathic the 63s might have been, it doesn’t make sense for all of the examples we’ve seen to launch right into more criminal activity, especially when some of them change their very specific methods in the process. It has come to the point where the only reasonable explanation is that whatever force or organization moved them through time has also reprogrammed them to accentuate their psychopathic tendencies. 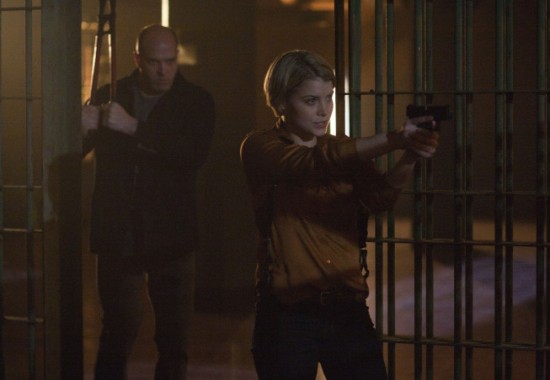 I bring all of those concerns up now because this episode doesn’t seem to fit the pattern. For one thing, there’s more than one returning “63”, though that’s not necessarily a problem. It’s more that their goals and penchant for violence are pretty much the same in past and present. They want to find the hidden gold, and they are willing to kill or maim to do it. Other than the fact that the entire story takes place on the island, there’s not much more that’s been revealed.

The other problem with this episode is that it’s a bit of a tease. The episode builds up to the notion that there is something important behind that door that the brothers want to open, something more than the gold they expect. When Donovan manages to blow his way through the door, only to find it empty, I fully expected the warden to uncover something far more interesting. Instead, he uncovered gold. Which is exactly what everyone thought was there. It felt a bit anticlimactic.

Beyond that, I still don’t feel as though the characters are distinct enough for me to care about them. Rebecca’s connection to the mysterious circumstances regarding the 63’s is probably the most interesting thing about her, and that’s tenuous at best. Hauser and Soto are still very two-dimensional. Because of that, there’s just not much to offer when the repetition threatens to make an episode boring.