It's easy to like "Awake" for its intriguing premise: Detective Michael Britten (Jason Issacs) is experiencing two different realities following a car accident. In one, his wife survived the accident, but his son did not. In the other, the reverse is true. Such a complicated overall plot could invite confusion from the audience. Judging from the pilot, that isn't a problem.
There is a flow to this episode that hasn't been present in any other pilot from this season. A lot of it really worked, from the outstanding visual palette (which kept confusion to a minimum) to the performances by everyone involved. This ranks up there with other fine pilots that have aired on television over the years. Not only does it run with its interesting premise, but it also puts a nice spin on the weaker police procedural elements as well. The detective stories are too common these days, but they will keep viewers to the show more so than odd science fiction-sounding central concept.

Perhaps because it appeals to me on a personal level, but I found the slow examination of the psychological trauma by Detective Britten fascinating. Is it all an elaborate dream? What is reality, and what is not? The characters face the tragedy of the situation head on instead of dismissing it, and that isn't something many television shows depict. It's a sad show, but all of the performances by the actors ring true, and as such, keep it from being outright depressing. 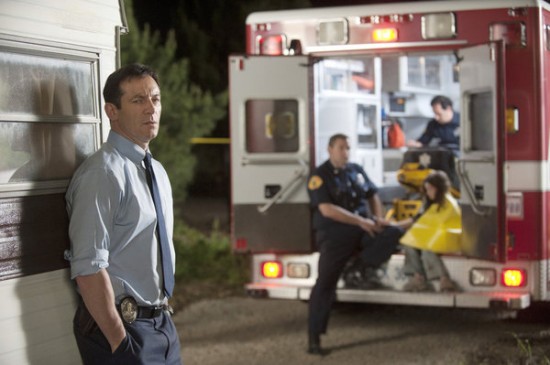 There's hope for renewal in each reality: The promise that Britten and his wife Hannah (Laura Allen) can have another child ostensibly to replace Rex (Dylan Minnette); The comely tennis coach who might be a romantic interest for Michael to move on from Hannah's death. The trauma will always be there, but there comes a time when a person has to go beyond that. Detective Britten is lucky though, in a sense, because he can see both his wife and his son, even as they both died in the accident. What person who has lost a loved one wouldn't want to experience what he's going through? The show should be able to play around with that a little bit. The psychiatrists in both realities make stirring cases for whether or not they are real or a dream.

I particularly liked the little detail that Dr. Evans (Cherry Jones) is insulted that both Dr. Lee (BD Wong) and Detective Britten are convinced her reality is the dream state. The question is starkly presented by director David Slade's decision to film one reality in a cool green filter (Rex survived) and the other in warmer tones (Hannah survived). It's all quite beautiful, and makes things much easier to track. It's unlikely the show will follow the same visual style from now on, but there are plenty of other ways to keep track of whichever reality Britten lives through.

The show also has some fun with its alternate reality scenario through Detective Britten's job. One reality has him getting a new partner in Detective Vega (Wilmer Valdorrama) while the other has him working with a long-time partner in Detective Bird (Steve Harris). Both characters exist in both realities, just in different positions. They all get the usual crime stories that have been done over and over again in the police procedurals that dot the television landscape these days. The nice twist is that Britten is privy to certain clues and details that bleed into both realities, giving him a way to solve both cases. This is Britten's superpower of sorts, a way to make him a police detective with a standout ability.

I like that Detective Britten doesn't question why this is happening. The show jumped ahead in time after the accident so we skip over the "origin story" and the usual awe our hero has over his unique situation. In a way, he's like the audience. The best way, I think, to view this series is to go along with the ride and not wonder why these things are happening or which reality is the correct one. Like Detective Britten enjoying time with both his son and wife (but not both together), we shouldn't care about the details that will just further complicate the series.

There are a lot of questions that still remain about this series. Only a few of them pertain to what is going on with the plot of "Awake". The most obvious question is why and how both of these alternate realities are occurring. The show doesn't seem to be in a hurry to answer those if the pilot episode is any indication. If they can follow this pilot with the same kind of ambition and emotional restraint and ease by which they present its concepts, then this might be a great series.

That is really the most important variable at play now. Most every time, episodes that follow a series pilot cannot live up to the standards of that pilot, especially if the pilot is a very good one, as this one is. There is a lot of chatter about the viability of a series with such a complicated concept as this. It's a hook, but it's a very good one, and the pilot did a great job at fleshing out the mystery behind the concept and how it affects the characters. It helps that all of the characters are pretty much a likable bunch. Will the show follow suit? That's something that can't be answered now. As always, we'll have to wait and see what happens.