One of the more well-known elements of Arthurian legend is the forbidden romance between Sir Lancelot and Guinevere. Given the generally family-friendly nature of "Merlin", this story isn't something I ever expected to appear in the show. But "Merlin" continues to surprise me, from time to time, with its unexpected forays into more mature subject matter. Still, I was a little apprehensive about how well they could handle this storyline and make it work.
One of the reasons I wasn't too bothered by Lancelot's death was because I had been (perhaps unfortunately) spoiled by the early Comic-Con trailer, which clearly showed Lancelot engaging in a sword-fight with Arthur, seemingly over Guinevere. So I fully expected him to return at some point during the season. His semi-return isn't quite as interesting as I'd hoped it would be, though, and he's dead again by the end of the episode. So that's a little disappointing.

The biggest hurdle this episode had to overcome was the inherent unbelievability that would result from having Guinevere and Lancelot act so out-of-character by having (well, nearly having anyway) an affair behind Arthur's back. The solution? Magic, of course. It turns out that the resurrected Lancelot isn't quite himself. He's just a shade, with no memories of his past self and a desire to comply with whatever Morgana commands of him. For Gwen, an enchanted bracelet is utilized to enhance her old feelings for Lancelot and make her act irrationally. 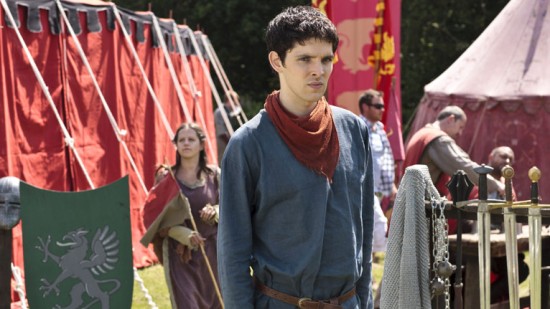 I can understand why the writers took this approach. A lot of it probably has to do with only having a single episode in which to believably portray the forbidden affair and its consequences, which really cripples the story. The usage of a "shade" Lancelot and an enchanted Guinevere detract from the power of the tale a bit. If more time could have spent on this storyline, with Guinevere and Lancelot first trying to resist temptation, and then slowly succumbing to it, the writers could have completely dispensed with the magical solutions altogether.

Still, I'm impressed that the show has even attempted to tackle such a mature element of the legend, even if it's a bit overly sanitized. One of the more impressive things to come out of the episode is an unusually dramatic change to the status quo. Guinevere's relationship with Arthur has been destroyed (though I expect it to be recovered before too long), and she has now been banished from Camelot. Not a terribly happy note to end an episode on, which might be the episode's most redeeming quality.

One thing that does bother me quite a bit is that the characters are continually so oblivious to the existence of magic. By this point, if I were one of the main characters, I would be suspecting sorcery left and right. Whenever any of my friends began acting strangely, I would at least be considering magic as a possibility, considering the ridiculous overabundance of situations the characters have found themselves in previously, when the exact same thing happened. "Merlin" is an openly pro-magic show, but I find it interesting (and amusing) that magic is the source of nearly every threat in the show. There's definitely some untapped potential here for adding a morally ambiguous layer to the story.