As the final episode of season 3 begins, a question clearly comes to mind. Will Neal's sentence be commuted? Or will Neal be stuck with the anklet for another two years? It all seems pretty clear cut. Even with Kramer involved. Agent Kramer doesn't trust Neal, so presumably, he wants things to stay exactly as they are. The stakes don't seem particularly high. Either Neal sticks around and solves cases with Peter, or he sticks around and solves cases with Peter while wearing an anklet. Still, the season and mid-season finales pretty much always impress on "White Collar", so my expectations were fairly high.
What I hoped for from the finale was a satisfying resolution to the current threat and a sufficient degree of setup for whatever new direction the show would be taking in season 4, which is certain to happen. "Judgment Day" did that, and then some. The big game changer was in the reveal of Kramer's real plans for Neal, which ends up turning Kramer into a much more intelligent villain. He doesn't want Neal to go back to prison. He wants Neal for himself, back in DC. Considering how much of an asset to the Bureau Neal has become, Kramer is not about to let him go. But at the same time, he's not willing to leave Neal with Peter. Kramer has been burned by a CI before, and he's hell-bent on keeping Peter from suffering the same fate.

But Neal really has changed, and he only resorts to less than legal activities when Kramer backs him into a corner. And even then, it's only to try to fix a mistake from a long time ago. It says a lot that Peter is willing to extend Neal's anklet radius, simply on the basis of Neal's word. Peter bends the law further than ever before to protect Neal, and he's not the only one. A lot of the fun of the finale is in seeing everyone step up to help Neal out, even when it puts their own careers at risk. Peter and Diana may both be in a bit of hot water after all of this. 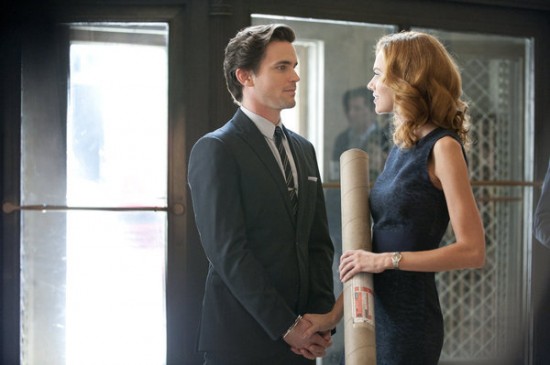 I enjoyed the side-trip to Roosevelt Island. Not only did it result in a lot of cool on-location shooting, as well as another one of Neal's crazy stunts, it also gave us some hints into Neal's backstory by introducing a character who seems to have been a foster parent to Neal (before he ran away). I'd forgotten that Neal's dad was a dirty cop, but I'm almost certain that the show revealed that to us already. What's more interesting is that Neal's discussion with Ellen suggests that his parents could very well still be alive and out there somewhere. I'd love to know more about Neal's backstory, so hopefully this is a sign of things to come. I think that the timing of this strongly suggests that it will be a potential direction for season 4.

It's not exactly hard-hitting drama, but as far as "White Collar" goes, this was a pretty great finale. Just when I think I know where it's going, they pull the rug out from under my feet. Instead of going with any of the expected outcomes, they force Neal to go on the run, with Peter's blessing. Things have changed a lot since the show began. I loved Peter's speech at the end, juxtaposed over Neal's escape. And I loved Matt Bomer's acting in that final scene, giving us a Neal trying to keep his emotions in check, but inwardly deeply saddened by having to leave his family in New York.

One of the reasons I liked the finale was in how it leaves the future so uncertain, for both Neal and Peter. Both will have to face the consequences of their actions. Things may still get wrapped up a little too quickly and easily next season, so the show can quickly jump back into its regular format of Neal and Peter solving cases together. But it's nice to see that they're trying to shake things up as much as they can, within their restrictions.