This show has settled into a particular pattern that strangely discards what makes for a compelling mystery in lieu of throwing out a bunch of twists that make little sense. This has been a consistent problem throughout the bulk of the season so I don't want to sound like I'm repeating myself. Both the plot and characters are completely lifeless, so it's hard to care about what happens in an episode. In fact, the episode caps off with a reveal that completely changes a core facet about a main character. It's jarring, and it put into question who I should even root for now to succeed on this show.
The central goal in Siobhan's manipulation has always been to take as much of Andrew's money as she can. Unfortunately, it appears now like she doesn't even know how the plan will turn out. She has a partner in Henry who can do her bidding in New York, to which he does, but without the sort of joy you might expect from someone who knows what he knows about Bridget and Siobhan. He's cold towards Bridget and the only big thing Siobhan has him do is give Bridget a box full of Siobhan's files. What those files could expose is not explored in the episode, yet it's presented as this turn shake-up in events from Siobhan's perspective.

Perhaps she is leading her sister to the killer who is out to get Siobhan. We can never really be sure. Again, Siobhan's endgame with this is still unclear. There is no inkling of what she truly wants out of this entire enterprise. What certainly doesn't help Siobhan's plan is that Andrew is knowingly carrying out the Ponzi scheme he's been accused of by many of the other characters on this series. At first, I was thinking that Olivia was alone in this, and the episode did hint at that for a little while. It would be her way of screwing over her business partner in sort of clever business takeover. 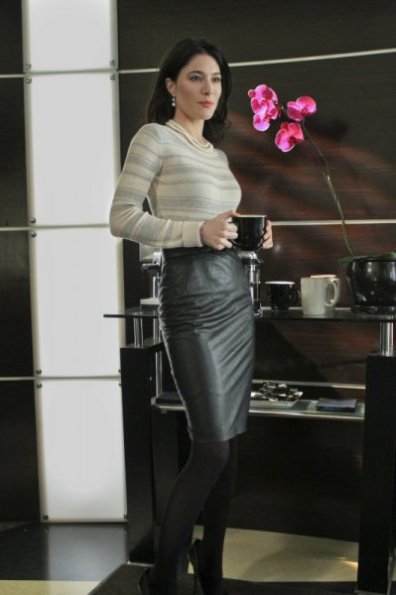 When Andrew ended the episode acknowledging that he was running the scheme, I was perplexed by this plot twist, if you can really count it as one. Andrew has been the relatively sane and the one consistent character on the show. He just got caught up in this whirlwind of events involving his wife and twin sister. Now that he is actively robbing people of their money -- a la Bernie Madoff in the real world -- we're supposed to believe he is the true villain, deserving of everyone going after his fortunes? It's a plot development that feels like a cheat.

So with the revelation that Catherine was behind the con to have Juliet, Mr. Carpenter, and Tessa steal millions from her ex-husband, the plot accelerates. She's running an entire operation where she was clearly responsible for Tessa's savage beating (showing her paying off the mysterious assailant felt unnecessary) and robbery of her share, was in cahoots with Mr. Carpenter only to steal his share of the money, and kept it for herself out of greed. Her daughter has no idea this is all happening. The details of this little subplot are somewhat interesting.

On their own, you could maybe build an episode around each revelation, but this show seemingly isn't interested in doing anything like that. Then there's the fact that the show chooses to telegraph all of it in such a way that there is no chance of any surprise. It's not particularly fun either, and doesn't develop the characters in any meaningful way. We know that Catherine and Juliet are superficial and manipulative money-grubbers but what else is there? What else can be done at this point? The subplot should hopefully go away at this point, but it's a mystery how the show will use these two characters in the future.

This show is in dire need of some kind of overhaul. I've been saying this for episode after episode, and it's going to fall on deaf ears, but it's worth repeating. It gets the fundamentals of telling a good and compelling mystery story all wrong. At one point here, Bridget mentions that someone could still be out to kill Siobhan. It's good that they acknowledge this fact, but there's no immediate danger to the character so it's hard to believe that might be true. The mob has been a missing entity of this show for much of the season. To have them pop up now is only going to deepen the identity crisis this show currently suffers from. How are they going to fit that smoothly with this financial potboiler plot that has been concocted? I don't see how the writers can pull that off, and they've given me no indication so far that they can do that.