"The River" has been one of the more confounding viewing experiences so far this season. Despite some pretty subpar writing, mediocre acting and a dubious central conceit, it has somehow managed to be very entertaining and watchable. One might even say that the show has a certain magic to it, if one wanted to pluck the low hanging fruit. So on the heels of a decent episode that brought up some concerns about the urgency around the search for Emmet but still suffered from all of the foundational issues plaguing "The River", viewers are suddenly and without warning treated to an absolute knockout of an episode that for an hour manages to get almost everything right.
One of my chief complaints about the series has been the atrocious dialogue and the characters speaking it. They have been wooden, straight out of the Horror Department of Central Casting. Jahel in particular has been particularly egregious, nigh on offensive as the troubled spiritually-sensitive minority who somehow knows the intimate details of the mystical nature of the world they’re trapped in. So I had to sit up and take notice in the opening scene of the episode with the exchange between Jahel and Lincoln. It was almost like it had been written for another show: it flowed naturally, and had the right tone and cadence of two friends shooting the breeze about the most mundane topics. That was immediately followed by the personal interview with Lena where we learn about her relationship with her father. Lena’s care for her father and desire to see him safe again shone through, especially with the anecdote about why she plays the accordion. It was an amazing turn from farce into sweetness. 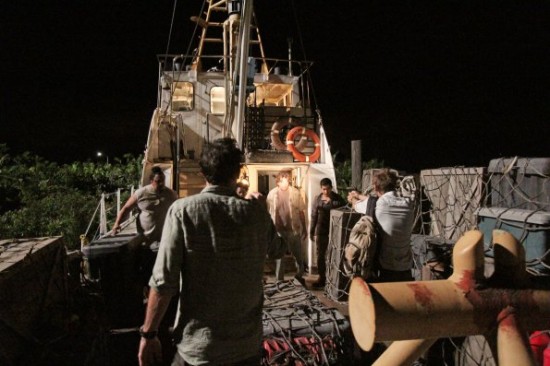 After the humanizing moments the mysterious magical curse of the week struck, with a ghost ship ramming the Magus and running her aground. Soon afterwards the crew comes into contact with a mysterious group of tree huggers, one of the few groups of people out in this uncharted stretch of the Amazon that haven’t tried to serve the crew up on a plate. Given the pedigree and genre of the show, it wasn’t hard to guess that the other crew was up to something no good. But the fact that the writers didn’t advertise it within the first five minutes of encountering the crew and allowed the mystery to develop naturally was a significant plus. The twist that the ghosts needed others to replace them was also more subtle and original than many of the series other paranormal aspects. It also let the audience sympathize with the other crew, adding another human dimension to the episode.

But the absolute center of the episode is Lena’s relationship with her father. The writers chose an excellent point, contrasting her situation with Lincoln’s. Lincoln had a rocky relationship with his father because he was on camera his whole life and made his family apart of it. But because of it, he was able to mount the expedition to save his father. Lena on the other hand, had a very healthy relationship with her father. But because he was behind the camera and no one saw him, he went unmourned and even as they searched for the others, it was about Emmet, rather than the crew. The fact that no one thought to show her the footage of her father, or that no one had even noticed it, was another rock in that pile. When she discovered that her father had fallen to the ghosts and that she couldn’t ever get him back was breathtakingly tragic.

“Peaches” was everything that "The River" hadn’t been able to capture: personal, human, relatable and was all the more powerful for it. It retained the horror roots of the series and the claustrophobic and humid atmosphere that has set the show apart so far while addressing nearly every complaint I had about the show. The change in quality was stark and one that hopefully follows on to the end of the season.