After shaking things up for a few episodes, “Person of Interest” was taking it easy this episode. Its players moved around the chess board, lulling observers with a pleasing, if conventional, mid-game. But then, the minor pieces move aside, and, like a discovered check, expose the attack of a much more powerful player. It was another 'Gotcha' moment, and one of Grand Master proportions.
The arena in “Risk” is Wall Street, an area Reese hasn’t ventured into, short of his head-butt of a banker in “Mission Creep.” Finch has some fun at Reese’s expense at the prospect, and gets to show off some mad “Project Runway” skills. But, he also admits the Street is as much about appearing clever as actually being so. So, life as a top covert operative, tailoring yourself to people’s expectations, is perfect training. Reese proves a quick study, reeling off financial instruments when he first meets the target, trader Adam Saunders.

Demonstrating Adam’s prowess via his correct bet on the fate of Robert Keller, the Virtanen CEO taken down in “The Fix”, was a nice, subtle touch. As was the first failure to force-pair a phone, indicating someone else has Alex in their sights. While the question of perp or victim is left open, there is some nice misdirection. Setting Alex up as a risk-taking, hard-driving, boss-romancing target of an SEC investigator may play on stereotypes, but also draws our suspicions.

In the end, Alex’s story emerges as a variation of Charlie Sheen’s in the movie, “Wall Street,” the hard-scrabble, lower-class kid who makes something of himself. Alex was raised by his uncle and guardian,Bob Sowoski, who, on Adam’s recommendation, has invested his hard-earned dough with the firm. Bob is no fool, and provides clues to the financial shenanigans that Alex has missed or willfully ignored. It seems the producers are intent on raiding “Rescue Me”’s best acting talent, as John Scurti invests Bob with his signature mix of affable gravitas. 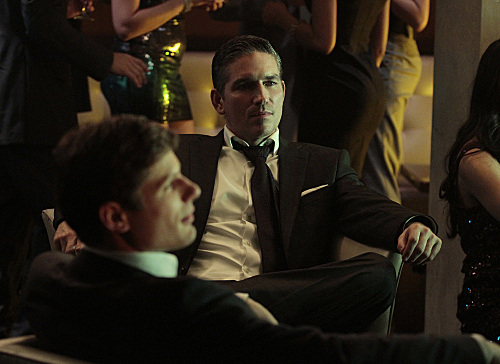 After having words over a bucket of balls, where Reese shows he could probably make it on the PGA Tour if this gig doesn’t work out, we see a neat reversal of one of the show’s staples. After frequently demonstrating how to take a car out, Reese shows he’s just as adept at escaping such an predicament. A second assassination attempt finally tips the balance, shifting Adam from suspect to temporary collaborator.

The scheme unravels in a dizzying array of moves and counter-moves, that recalled both “Wall Street” and “Trading Places.” Some of it was a tad too convenient, like finding just the right article at the homeless camp, but paced fast enough to breeze over such conveniences. Hiding Adam in the camp Reese knew from his time on the streets was another nifty callback. Reese’s respect for Joan there was a reminder that, while he’s been hardened and changed, he hasn’t completely lost his humanity.

But the best callback was the whammy at the end. Having Elias at the other end of that call, pulling all the strings up to, and including, the deliberate plant of the phone was another brilliant melding of the episodic with the story-arc. In my previous review, I was going to mention the re-emergence of the corrupt cops heralded the return of Elias. Not having the confidence of the Machine, I cut the reference. Now, I’d say proximity to it may be honing my deductive powers. In fact, I’ll go out on a limb and predict "Person of Interest" will continue to be one of the best shows out there.