"18 Miles Out" is yet another episode containing a surprising amount of action and suspense, along with quite a few zombies. I find it hard to complain, given that the genre elements were the main reason I started watching. I do enjoy good drama, and so I've had to learn to appreciate "The Walking Dead" for what it has become. A certain amount of drama is necessary in virtually every genre. But on a more superficial level, I started watching "The Walking Dead" because I wanted to see people experiencing the suspense, dread, and horror of a zombie outbreak. So far, the second half of the season seems to be offering a good deal more of that than the first. So it's fair to say that it's aligning more closely with my core tastes as a consumer of entertainment.
The episode can be divided into two, completely separate, parallel stories. In one, Rick and Shane must take their new prisoner and find a place to release him. And in the other, back at the farm, Lori, Andrea, and Maggie must deal with a suicidal Beth. I'm tempted to say that this divide is one of quality, in addition to location, but that wouldn't be entirely accurate; only mostly accurate. I was far more interested in what was going on with Rick and Shane, and it wasn't just because of the inclusion of zombies, though that certainly helped. Starting out the episode with a brief scene of the intense survival situation that would later unfold probably also helped add interest in the preceding scenes.

I may have said something similar in a previous review, but I think that one consistent problem with the drama in "The Walking Dead" is the artificial nature of it. All of it is fake, of course, but audiences can generally tell if the drama unfolding before them is naturally or unnaturally inserted into the story. In this case, one gets the impression that the Rick and Shane material is a very relevant part of the overall story. That conflict between the two men has been building since the beginning of the show. This must surely have been the main idea behind the episode; to do a Rick and Shane episode that allows them to get things out in the open in the midst of dealing with the new problems created by their prisoner.

But then they must have thought, "hey, we better come up with something for the farm now. Give them something to fight about back there." To be fair, the suicide concept isn't completely artificial. It ties in with Beth's condition from previous episodes well enough. But for the most part, it still seems like a poor justification for all the bickering between the women over camp. Beth is just used as a catalyst to get Lori and Andrea arguing over everything that pops into their heads. I get it. It's edgy. It increases the tension. That's kind of what this show is all about. But I like it more when they disguise it better and do a better job of putting us inside the characters' heads, so we aren't completely perplexed when they lay into each other for no apparent reason other than everyone being on edge. 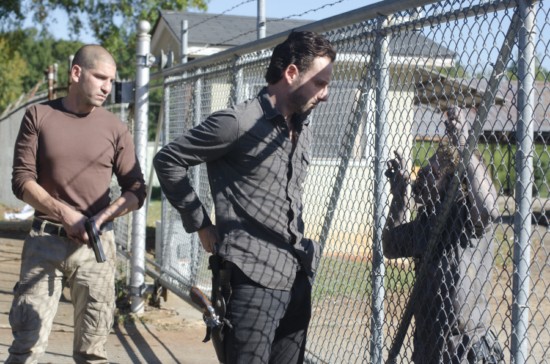 I found Lori's shift in character this week to be particularly confusing. This may be going somewhere, but I'm struggling to understand it. I'm especially struggling to understand why she seems to have adopted 19th century gender roles. A "let the men be men and the women be women" sort of thing. I can't tell if she's simply frustrated about something, and it's serving to make her more irritable and confrontational, or if this is just part of her new philosophy. I suppose Andrea didn't help things by telling Lori to her face that she was flat wrong, so she was kind of asking for the response she got. But she wasn't entirely wrong in her arguments. Yelling at Beth and forcefully taking away the knife isn't exactly the best approach to helping a suicidal person, though I don't know if simply leaving her to her fate was the best idea either.

If cooler heads ever seem to prevail on this show, it's through Rick. His experience with Shane and the prisoner includes serious foreshadowing of events to come. I was fairly sure that Rick would go back for Shane, but that might have been a fitting end for him. He expects Rick to make the hard choices, expect when it comes to him, of course. Whether or not he's glad that Rick returned, he's also probably realized that Rick's actions give him more ammunition against him. Shane will sacrifice someone if it serves his best interests, but Rick will go out of his way to keep people he doesn't even know from dying. This makes Rick the better, more moral leader overall, but at least partially proves Shane's point.

I wondered, for a moment, if some sort of twist was impending when Rick and Shane noticed that there were no bite marks on the two walkers that they'd just killed. Rick suggests that they were scratched, and seems fairly satisfied with that theory. And that may be the end of it. But the way the scene was presented left an air of mystery about it. And what about those burned bodies? Could this have something do with the other survivors out there? Or is this just a random location where some holed-up survivors eventually succumbed to the zombie threat around them? That may be all there is to it, and we're not meant to theorize any more about it, considering all the zombies that came from the school.

I've always had conflicted opinions about "The Walking Dead", and that remains as true as ever. It's a flawed experience, no doubt. But it's always had enough compelling elements to hold my interest. Perhaps a more plot-driven approach would benefit the storytelling and improve the character drama to a certain degree. The highlights of the show always seem to be the periods of greatest suspense and terror, or moral ambiguity and uncertainty in the face of inconceivably horrible circumstances. Tapping into that is what made the pilot episode and the season 1 finale as good as they were. But the show has struggled to reach those heights again (taking into account the impressive, recent mid-season finale).