A much better A-story than the previous episode compliments the very strong, continuing trend of great character stories. A formula has definitely emerged, but it's a fun formula, and this time around the "Lost Girl" writers use it to touch on an aspect of the show that has, until now, been taken for granted. Bo and Kenzi AND Dyson and Hale stumble across a strange series of murder/suicides among the seemingly-content middle class, which Dyson thinks are too suspicious to leave alone. On what seems to be an unrelated note, cracks are starting to show in the BFF partnership that is Bo and Kenzi, with tempers and jealousies flaring up, until the heroes realise that some kind of Fae spider-creature is running around and driving people insane. As with a lot of "Lost Girl" plots, it's easy to draw comparisons to other episodic genre shows, but it's also easy to forgive because it's hard for any genre show to be 100% original these days, and this one does a great job of making them fun and entertaining within this universe and with these characters.

The big draw of this "Crackers Don't Matter"-reminiscent story (for those who remember "Farscape") is that the relationship between Bo and Kenzi is finally put under a microscope. This pair's friendship, while a strong and entertaining aspect of "Lost Girl", had a very abrupt and unsatisfying beginning back in the pilot and it seemed like the writers were too keen to have them BE friends that they completely skipped over the process of them BECOMING friends. "ArachnoFaebia" goes a long way towards making up for this lack of process by using the crazed paranoia-inducing arachnid to show all the little cracks and frictions between these two drastically different characters. If it weren't for the spider's appearance so early in the episode, it'd be easy to think this was the natural kinks in their relationship coming to the fore. Hopefully these differences will be explored further in future stories in more of a BFF context. 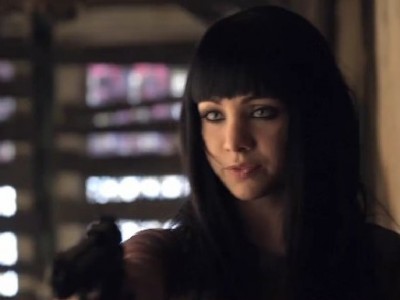 In addition, the Bo/Dyson/Lauren love triangle is explored further. Better yet, it's explored really well. After spending the previous episodes setting up the different relationships between everyone, this one put all three characters together in a gloriously awkward scene at the beginning of the story and then ships Bo away into her domestic dispute, creating a great scenario for Dyson and Lauren to interact. The case of the week – stopping the spider – gives their scenes momentum, but their interactions are gravy on top of that as these two different personalities clash, the scientist and the animal, over how to deal with the problem. Dyson is all heart, driven by his emotions, while Lauren is doing the thoroughly logical thing to fix everything. And simmering beneath it all is the tension of the love triangle they both know they're involved in, but mercifully spend almost no time actually discussing.

Mixed into all this are fun new details about the Fae world as Dyson and Lauren compete with the bureaucracy of the Light side to solve the problem. The supernatural hazmat team isn't something one expects to see and more interesting still his how much power Lauren seems able to wield among the Light, leading to Dyson's moment at the end of the episode. Dyson's investigation at the beginning of the episode has some interesting nuggets in exactly what job he's doing: solving crimes like a detective, covering up the Fae world AND investigating potential Dark schemes on behalf of the Light. But the writers keep things light, keeping it to tiny details mixed into the story rather that throwing the Fae world at us.

"Lost Girl" is quickly growing into one of the most fun little genre shows on television right now, with compelling characters and just the right light-hearted tone to compliment the more grim-dark fare of shows like its Syfy lead-in. This episode only improves that reputation with one of the best installment of its run yet.