SciFi Vision | All Reviews | Television Reviews | Justified 3.6 Review: "When the Guns Come Out"

Justified 3.6 Review: "When the Guns Come Out"

This fine season of "Justified" continues on. While I have the small inkling that a stumble might just be around the corner, I'm really enjoying the ride for however long it keeps going. The danger in Harlan County seems to escalate with every episode, and it's kind of neat to see how each character reacts to those events.

This episode was all about seeing those reactions from Raylan or Boyd or Quarles or Limehouse. Each man gets closer to learning how the others are operating so it won't be long until there is a full-on war that escalates the violence even further than what we've already seen. They're all smart operators in their own different ways, and there might be one victor that emerges, or not. There is still a lot of plot to get through before we see what the endgame can bring about in the future.

It would make the most sense from Boyd's perspective that it was Quarles who ordered the raid on the oxycodone clinic after their tense conversation last episode. Boyd does recognize that the raid seems to be outside of Quarles' style. It's too brazen, and Boyd knows that Quarles is too smart to make such a reckless move so soon after they had just sized each other up. He investigates with Ava throughout the episode, also working an angle with Limehouse, the other antagonist who would hold a grudge against him and his crew. To his surprise, Limehouse knows more than he lets on about Boyd and his family history.

The episode shows where each villain in the story is sitting at the moment: Boyd and his gang under attack; Limehouse ultimately having to deal with one of his lieutenants firing the first salvo in a war without his permission; Quarles mixing up his information on Boyd's influence and crew. I liked that Quarles' bad information is the show painting him clearly as an outsider. If he had spent any time growing up in Harlan County or around the Givens or Crowders, he'd already know that Raylan isn't in Boyd's pocket and that Arlo is an integral part of Boyd's crew. Now that he has clear information from Wynn, he can adjust his plans accordingly. I think we'll be seeing more calculated attacks from Quarles very soon. Limehouse seems unwilling to get in the middle of this fight right now, but he may yet have something else up his sleeve that neither Boyd or Quarles will be expecting. 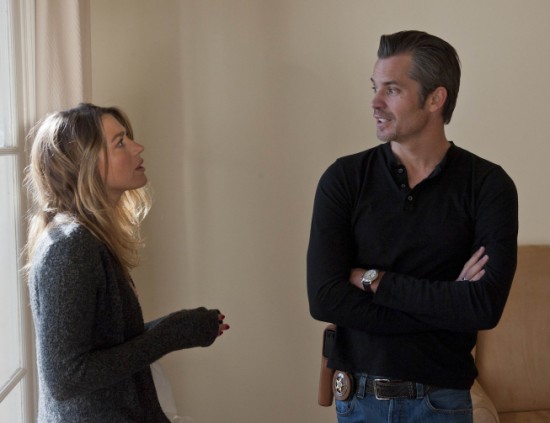 Now Raylan has to deal with a lot of personal issues in this episode. The oxycodone raid occurred on his Aunt Helen's property, and that infuriates him. The oxycodone clinic is at that location because Arlo -- who Raylan still absolutely despises -- allowed Boyd and his crew to set up shop there. Despite Raylan's warnings about doing business on the Aunt Helen property again, I think Boyd will still continue to run things there. The one thing Raylan has always been good at is his job, and he proves to be a much better investigator than Boyd in this instance. I enjoyed his brief team-up with Ava to find out who carried out the raid on the oxycodone clinic.

The subsequent action sequence was also enjoyable for just how ridiculous the situation was. It was pushing the limit on how many scrapes and gun battles Raylan attracted in such a short timespan, but the show wants to keep the attention of its viewers somehow. All of this chaos is going on and all the while, Raylan is searching for Winona. This was arguably the weakest aspect of the episode. I get that Winona doesn't particularly like the dangerous lifestyle Raylan lives with his job. I just wish she would stick with one philosophy and not be so wishy-washy about everything. In the end, it sounds like Winona wants to be with Raylan, but one wonders how long that will last given that she has stepped out on Raylan multiple times now.

The complications grow and evolve with every episode of this series. Now that it's finished with the setup stage, having us get to know the characters involved and what their various motivations might be, they now have to collide or clash in some way. It's only a matter of time before small-time violence will escalate into something much larger. I can't help but think sometimes that it'd just be better for everyone if Raylan left town for Glyncoe. Let all the wolves eat each other, then pick up the pieces when the dust clears. Raylan's personal ties to the region seem to ensure that Harlan County remains a place overrun with criminals of the worst kind. This seems like the kind of multi-faceted war the good guys just can't win.