SciFi Vision | All Reviews | Television Reviews | Fringe 4.14 Review: "The End of All Things"

It’s amazing when a show can sustain a mystery for nearly four seasons, only to provide a resolution that is not only logical but deceptively simple.  I can’t say that the origins/nature of the Observers is particularly shocking, since it was one of the many theories that has been tossed around since the beginning, but I love how it fits so perfectly with what we have seen.

It would be easy to call this retroactive continuity, but I don’t think that’s the case.  This isn’t an “Angel” scenario, where an entire series is reframed in the course of making a villain or higher power responsible for everything up to that point.  This is, instead, a culmination of foreshadowing.  I would be far more likely to point to “resolutions” during the final season of “Lost” (such as the nature of the “whispers”) as being more retroactively applied.

In essence, the Observers are a team of scientists from the future, the product of human evolution and technological advancement, that are studying the events that led to the formation of that future society.  This era is particularly important for two reasons: this is when Peter and Olivia are meant to have the child that is uber-important to the creation of that future, and this is also a period that September inadvertently altered.

The nature of the Observers was already hinted strongly in “Making Angels”, in terms of their ability to see past, present, and future, and thus monitor timelines and alternate universes.  They don’t come out and say it, but since Peter is the one that is most able to trigger Olivia’s ability to cross the barrier between universes (among other things), their child would logically carry forward that ability.  And thus, it makes sense that the child would be the ancestor of the Observers. 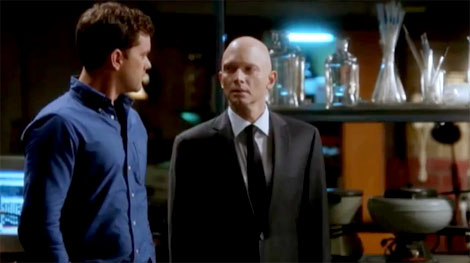 What is still unclear is the conflict among the Observers over Peter’s existence.  How exactly was Peter supposed to father Olivia’s child, if September’s grand error was to distract Walternate, which led Walter to abduct Peter?  And even if circumstances were always going to lead to Walter’s momentous choice, how does it make sense to wipe Peter from existence, because the wrong child was born?  The premise is now on the table; it’s the context that needs clarification and exploration for all the pieces to fit together.  (And at this point, the writers have thought through enough plot points for me to give them the benefit of the doubt, and assume this will all be explored as the season progresses.)

My take is that September’s explanation was rushed and incomplete, suffering from the problem of taking higher-dimensional thinking and explaining it to a regular human being.  September was trying to communicate what Peter needed to do, not all the whys and wherefores.  Given that “Fringe” is as much about perception and perspective as modes of consciousness, I’m fairly certain that the Observers’ understanding is just as flawed and imperfect as everyone else’s, and they are just acting in accordance with that view.  The fact that they are in conflict within their own ranks is evidence enough that they don’t really know the full story.

And September could have simply been telling Peter all of this as the expedient way to fix his mistake, not as a view of how things were supposed to go before his intervention.  After all, if Walter doesn’t cross over, the Alt-Fringe universe never breaks down, Fauxlivia would have likely been far more like Fringe Prime’s Olivia, and they could have had the child that led to the future the Observers wish to preserve.  It’s not Baby Henry’s genetic nature that is the problem, but rather, the world in which that child would have been raised, and thus the choices that he would have made.  Something that was glimpsed, for example, in “The Day We Died”.

Turning to other plot threads in the episode, the writers did a nice job of playing on expectation.  It wasn’t particular hard to figure out that the Nina in captivity with Olivia wasn’t the one that raised Olivia; the interrogation scenes made that fairly clear.  What I didn’t expect was that Olivia would figure it out, and realize that “accidentally” pulling Peter into the mix would give her the boost she needed to use her abilities against Mr. Jones.  That was a very nice touch!

The callbacks to the first season were very much appreciated, and Mr. Jones’ return has given this season the kind of villain that the show hasn’t had in quite a while.  The fact that he has “evolved” to the point where physical damage is a mere inconvenience is a very big problem.  But it’s his calm, casual amorality that makes him truly compelling.  His comments throughout his interrogation of Olivia were priceless.

This season of “Fringe” has been a slow, steady build to some incredibly strong episodes, and this has been some of the best material in the entire show’s run.  Any writing staff that can take the idea of a “destined couple” and make it work so well deserves enormous credit.  It’s going to be a long wait for the show to come back for the last eight episodes of the season.