It feels like those responsible for making episodes of "Ringer" wants viewers to be surprised by the revelations they dole out in each episode. The thing is, those surprises are often telegraphed early and don't feel very earned. Everything that happened here wasn't as confusing as previous episodes, but it's missing that emotional connection to draw people in. It's hard to care about these people when the primary motivation is getting as much money as they can, when they already live in the lap of luxury. Problems are compounded by the fact that a likely one-time guest star can act circles around members of the main cast, even in a subplot that doesn't really have anything to do with the overall arc of Siobhan's manipulation.

The subplot involving Bridget, Siobhan, and this new guy Dylan was relatively straightforward. That description hasn't been applied to a lot in this series. The story takes an odd detour into exploring something from Bridget and Siobhan's collective past. It seems that Siobhan had a relationship prior to her unhappy marriage to Andrew and also had a son named Sean with Dylan. Bridget, who is also friends with Dylan, made a fateful decision against Siobhan's wishes that leads to a car accident where Sean is killed. This is the reason why Siobhan cannot still forgive Bridget for what she's done and why Bridget descended to drug addiction.

I thought it was the best subplot the show has done so far, primarily because the characters took the emotions behind the tragedy seriously. Both Bridget and Dylan are seeking forgiveness from Siobhan, and that partly explains why Bridget elected to assume her sister's life. She wants to fix all of the relationships that her sister has broken. While she hasn't been all that successful up until now, she tells Dylan (as Siobhan) that she's no longer angry with him for killing their son. 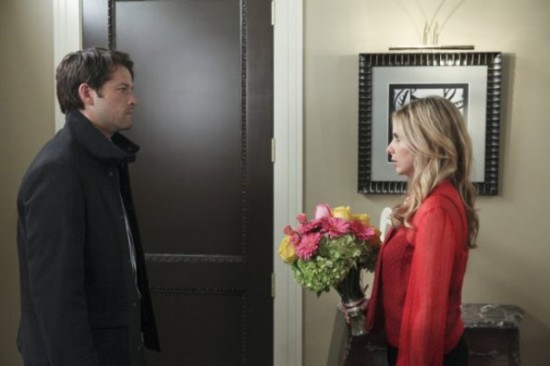 Guest star Misha Collins sells Dylan's pain and guilt over Sean and the rocky relationship he had with Siobhan very well. It is a marked contrast to the often blank and emotionless work Sarah Michelle Gellar has been saddled with as Bridget. We may never see Dylan again, but he did at least make an impression. That's something in real short supply with this show.

As for the other subplots in this episode, I couldn't really get into them. Various characters are still scheming their way to get at Andrew's money. Siobhan and Henry continue to find a way to rob him and pin him for fraud at the same time. It involves Henry keeping a watchful eye on Malcolm for some unknown reason at the behest of an absent Siobhan. Juliet's big plan to regain her trust becomes more and more complicated, although that was actually the most predictable of all the subplots in the episode.

First, Tessa makes the mistake of spending her money on an expensive car, then reveals that she's been hiding her cut of the cash under her bed. If there was no better candidate for elimination from the show, I'd say those two actions put a big spotlight on Tessa. She gets severely beaten, Juliet assumes it's Mr. Carpenter, and now thinks she went in way over her head. Knowing this show's penchant for showing one thing and then going in a completely different direction, I'm thinking it's not Mr. Carpenter who beat Tessa.

I wouldn't be surprised if it was really the mastermind behind the whole plot, revealed in this episode in real obvious fashion to be Juliet's mother, Catherine. What is the motivation behind this? Does Catherine and Juliet intend to stick it once and for all to Andrew since he married Siobhan? It's so murky, and I get the feeling that the payoff in the end isn't going to be satisfying enough to justify spending so many resources on this aimless plot.

"Ringer" lacks this spark that is so fundamental to a show like this. It should be a fun soap opera that airs in primetime, yet it's such a chore to get through most of the time. It feels so rote at times. There is a bounty of talent in front of the camera, and much of it seems wasted. The plot doesn't have much direction. It lumbers along, twisting and piling up momentum killers at the oddest times. Characters even make questionable decisions that don't make much sense.

It's revealed in this episode for example, that Bridget ultimately wants to tell Andrew and Juliet that she's been lying to them by assuming Siobhan's life. She seems to expect that they will forgive her at some point, like she forgave Dylan, though under the guise of Siobhan. She isn't thinking things through, and the show hasn't even addressed the ick factor in Bridget falling in love and sleeping with Andrew. There are so many things wrong with the show that it's a wonder whether the writers will have enough time to get all of it (or at least most of it) fixed. I can't say I'm holding my breath for that to happen any time soon.