SciFi Vision | All Reviews | Television Reviews | Once Upon a Time 1.13 Review: "Whatever Happened to Frederick"

Once Upon a Time 1.13 Review: "Whatever Happened to Frederick"

“Once Upon A Time” has been stuck in a rut for a while now. And as that channel gets deeper, it’s harder and harder for the wheels to jump out of the track. In “Whatever Happened To Frederick”, for every sign of traction on the fairy-tale side, it was brought crashing back by uninspired storytelling and some really atrocious dialogue back in Storybrooke.
Prince James/Charming’s tale takes an interesting twist when Princess Abigail reveals she’s as against their marriage as he is. Her true love, Frederick, had been gilded by King Midas while protecting them from brigands. (I do wonder if it was an accident, or Daddy just didn’t think he was good enough.) ‘Love’s true kiss’ cannot penetrate the gold, belying the efficacy mentioned by the Queen last episode. However, it’s certain to be featured again, probably once again with Emma. Abigail offers to help him escape, and he gallantly offers to restore Frederick to her.

He must battle with a siren for the magic water that will free Frederick. While tempted, as she transforms into Snow White in a water-slicked dress (who wouldn’t be), he musters a show of character sorely lacking in his counterpart. It was also good to fill in the Princess’ back story, and finally provide some context for her snide behavior. Too bad they haven’t done the same for her counterpart. 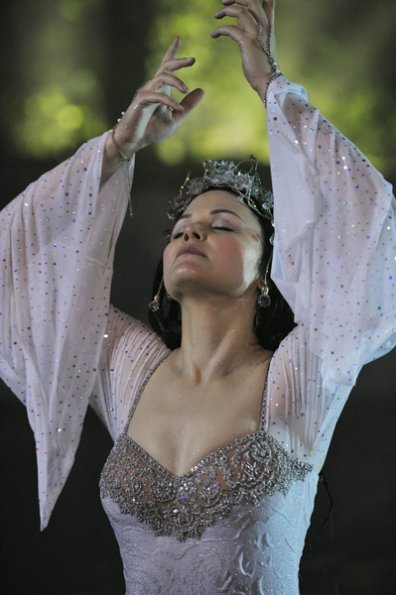 While James escapes the siren, the love triangle back in Storybrooke is the dead weight threatening to sink the show. I suppose the point is to contrast David’s actions, or rather inactions, with James’, and make us wonder why he’s become such a cowardly git. Despite a golden opportunity, a wife trying to revive her husband’s memories, we know nothing of their history together. Couple that with lines this leaden and banal, and it’s impossible to care about any of them.

Meanwhile, the byplay between Emma and the man we now know as August Wayne Booth falls somewhere in-between. It feels a little forced, but perhaps both Emma and the audience haven’t quite recovered from the loss of Graham. Given that we know parts of the fairy-tale world are buried under the town, the well presumably draws from the magic lake. And if Emma did wish for the book, will she be tempted to return for a more selfish request, unaware the granting of her first was engineered?

The re-binding, and presumed re-writing, of the book was certainly the most tantalizing part of this episode. We know Henry will quickly spot any changes. Whether or not they actually effect changes in the town will go a long way towards establishing if Booth is, in fact, the author. It could also reintroduce the question of whether things are actually changing, or only perceived to change, via the book’s auto-suggestion.

Two steps forward, one step back. It may be progress, but painfully slow at this rate. While I am more intrigued and hopeful after some of these developments, they haven’t won me over yet. With the end of the episode signaling that Katherine’s disappearance will be driving, at least, the next episode, I fear I may have to wait a while longer before I feel the sweet kiss of better writing.

John Keegan is the Editor-in-Chief of Critical Myth, a partner site of SciFi Vision. Edmund Boys is Critical Myth's reviewer for Once Upon a Time.
Twitter
BotonSocial por: SocialEmpresa
Category: TV Reviews & Recaps