"Lamia" is highly reminiscent of so many past "Merlin" monster-of-the-week episodes. There's a nice, spooky feel to the episode, and what it might lack in actual scares, it makes up for to a certain degree in atmosphere (especially near the end), except during one particular scene. I do love a good swashbuckling fight scene, but this one sticks out like a sore thumb in what is otherwise a straightforward chiller. Thankfully, this is only a minor distraction from the foreboding atmosphere.
I enjoyed seeing Merlin being forced to actually utilize the medical knowledge and skills that he's learned from Gaius. It makes a great deal of sense that Merlin, having worked with Gaius so much, would have picked up a fair amount by now. I doubt that this will happen, but I wouldn't mind seeing more of this side of Merlin in the future. He handles himself as a physician rather well overall, and it would be nice for his non-magical alter ego to be seen as more than just a bumbling servant who spends too much time at the tavern.

It's interesting to see Agravaine involved in combating a threat which has nothing to do with him or Morgana. For a while, it seemed like he was just playing the loyal subject. But things would definitely be easier for him if Gwen, the knights, and Arthur's favorite servant were all out of the picture. So he does, rather quietly, work to further his agenda by hiding tracks and pretending to be the pragmatist. Sadly, if you removed this one tiny scene from the episode, you lose all connection to Agravaine's greater role in the season-arc. 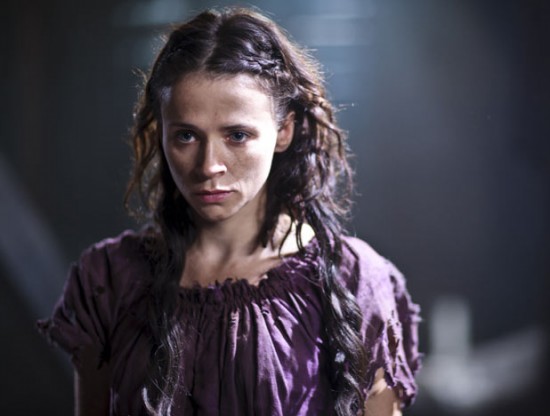 The Lamia makes for a reasonably good antagonist, but her siren-like abilities don't make her terribly original or interesting. And her motivations seem overly simplistic and boring. It might have helped if there were one or two surprises about her true nature or goals. Also, the Lamia is built up as this super-powerful monster, but she becomes a bit underwhelming when she's no longer able to rely on her seductive power over men and must revert to her true form.

For most of the episode, I kept expecting it to turn out like nearly every other episode has in this season. I kept expecting it to contribute in some significant way to the season arc. So when Guinevere started questioning Merlin about why he wasn't affected by the Lamia, I began to suspect (and strongly hope) that this would be the episode where Gwen finally discovers Merlin's secret (presumably during a climactic moment in which Merlin has to use his powers in front of Gwen).

Unfortunately, Arthur shows up just in time to avert this from happening. I really don't understand the reasoning behind keeping Gwen in the dark about Merlin. This would have been the perfect moment to progress their relationship in this way. And it would have made the episode a bit more than just another standard monster-of-the-week affair. Arthur's rescue of Merlin and Gwen isn't quite as glaring a plot contrivance as we've seen so much of in past seasons, but the fact that Arthur somehow finds the castle and arrives at just that moment makes it feel uncomfortably similar.

Almost every episode of this season, so far, has included some kind of significant connection with the larger story arc (I'd say every episode so far, if "Aithusa" ends up having any effect on anything else this season). So it was a bit surprising, and perhaps a bit disappointing, to see such a stand-alone episode at this point in the series. Stand-alone episodes don't necessarily have to be average or sub-par, but it is significantly more difficult to make them interesting and worthwhile, especially for this show.