This was an odd episode. After the credits rolled I looked back on it and considered it a pretty decent episode, one that certainly if it was in another series wouldn’t be really worth mentioning. But after realizing that it was the halfway point of the season, I got to be a bit more concerned. There was not any sense of urgency about the episode, and there hasn’t been really any sort of coherence in the narrative or in the development of the characters. So far it’s meant that the show has just been entertaining, if at times a bit farcical, but it’s nonetheless disappointing.
One of the first things that came out to me during the episode was just how jumbled and confused it seemed below the surface. Since they’ve entered the Boiuna, they’ve been attacked by restless spirits, bloodsucking demons, and slept underneath a tree hung with dolls to placate said spirits and demons. The picture that the writers seemed to be painting was one of a Conrad-like journey further and further into the heart of this mysterious territory, fleeing further and further from the safety and sanity and scientific civilization from whence they came. However, in this episode, we learn that they have been in contact with ‘back home’ at the very least. It doesn’t seem to fit with the vibe that the series was trying to create. It feels very much like a movie or a miniseries extended out just a little more than it could handle. 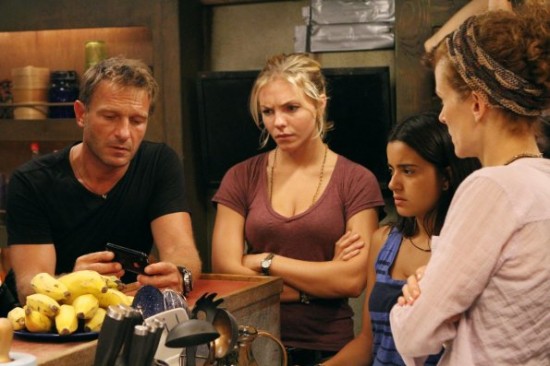 That doesn’t mean that the core story of the episode wasn’t compelling, and it in fact fit in with the heart of darkness theme very well. The crew encounters a camera man, Jonas, from Emmet’s crew hung from a tree, only to discover that he was still alive that he had been in the tree for months. He fell afoul of the fickle jungle by trying to film a rarely seen death ritual of an obscure Amazonian tribe. By doing so with his camera phone (which takes suspiciously good quality video, I might add), he steals his soul in a fashion similar to Amish beliefs. The jungle finds this unacceptable, and attacks the crew of the Magus until they give up Jonas in both the past and present.

While the internal logic of the curse leaves something to be desired and the ultimate solution definitely doesn’t make a great deal of sense, the writers thankfully instead choose to focus on the moral quandary it presents the crew. It allows Lincoln to develop and show his moral character amidst some claims that he doesn’t do enough to save people’s lives because of his role as a medical researcher rather than a hands on ER attending or surgeon. Despite the attitude of Clark and Kurt, he refuses to compromise, which serves as a good contrast with his father’s choices. I didn’t mind that Jonas survived, I do wish that the writers had created a bit more believable scenario though. It was also extremely refreshing for the show to throw off its horror stereotypes where no listens to the messenger character. In the words of Clark, “When that girl gets scared, I listen!”

But coming back to the point I made in the introduction, this would have been a fine early to mid-season "filler" episode. But this is the halfway point to the season. We have no real idea what is going on in the story, which hasn’t advanced at all, nor have we learned a great deal about these characters, this episode aside. While I don’t think there is much time to really save the season, there is enough time to create a short but compelling arc that leads them to some sort of resolution on their quest. I’m not sure that the writers will be able to do that though.