I viewed this episode as Will's fall from grace. He may have escaped grand jury indictment, but the show is not going to ignore every little last detail or its consequences. So Wendy Scott-Carr's last act for the SAO was to take the details of Will's client embezzlement to the bar association in a last-ditch effort to stick it to him by getting him disbarred.
It begins a chain of events where Will has to make a choice to yield to whatever decision the bar association goes forward with, or to fight it. It comes and goes quickly, and I was impressed by how smoothly everything with the subplot was handled. The other stuff in the episode couldn't really stand up with what was happening to Will. The main issue now is where everything will go after this. Can the firm survive with just Diane at the helm?

Despite its ties to the horrors committed by the Syrian government in the wake of an uprising, there was this odd detached feeling associated with the case. It involved some computer software that allowed specific people to track those using it for the purposes of furthering the uprising against the Syrian government. Since the firm is coming off Will's escape from indictment, there's renewed purpose in Will and he elects to take on the case. It just doesn't quite work. He starts the episode full of vigor and fire, willing to take down the man responsible for the software, and it slowly goes down from there. The firm works to squeeze the software maker for a good amount of money to the brother of an American who was killed in Syria. Only, it's later revealed through a neat bit of revealing evidence by the prosecution that she is alive.

Along with that bit of information, which changes the focus of the case from monetary reparations to finding the girl, Will gets handed the news of his disbarment. There are some terrific dialogue scenes between Will and other characters on what he should do with the disbarment. I particularly enjoyed Will's brief moment of self-reflection and accepting the notion that once you get dirty, everyone comes after you and it becomes more difficult to truly escape. 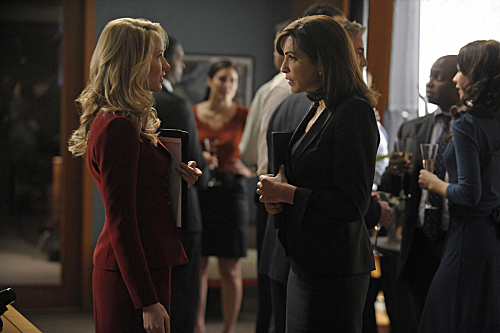 By the end of the episode, Will is completely beaten down. He's been forced to take a six-month suspension away from the law and trying cases. What will he do without the law, being in the courtroom and in his element? Diane seems like she can handle the firm by herself, but I have doubts about how long that will last before she is overwhelmed. Perhaps Alicia can help her from time to time. The mentor-student relationship has been built in the background throughout this season and that might fast-track Alicia's path to partner.

The episode tries to give Eli something more tangible to do than fighting against small potatoes crises, and he's dipped his toes back into the political arena. I've been saying that Eli needs to go back there because that is where he's utilized best. There's a personal element involved here because he's now consulting on his ex-wife's State Senate campaign. Though she denies it, I do believe Eli's ex-wife went after Stacie Hall, Eli's rival, with the express purpose of getting him to consult on her campaign. It gets Eli's competitive juices firing, and he gets much joy in beating everyone else. He says that he'll be slightly involved with her campaign, but I get the feeling that he'll change tacks soon. Eli might also take a larger role at the firm now that Will's has been reduced. That would be interesting to see since it connects Eli to the main narrative at the firm instead of him going off on his own adventures.

It's been made clear that Will is not completely off the show despite his suspension. He'll be around the offices to probably provide background to some cases. He just won't be in the courtroom to fight any of those cases. This should bring many of the main characters to the forefront, especially Diane, Alicia, and Eli, to compensate for the loss. That mysterious tax case involving Kalinda would be the first critical issue for this new hierarchy to handle. What will come of that? This episode demonstrated the fact that you can't ignore even the smallest of details from the past. Wendy Scott-Carr went forward with Will's disbarment at the end of the previous episode. Look at the fallout. There may be more bad things to come, and every character will react to them in different ways.