SciFi Vision | All Reviews | Television Reviews | Advance Preview: A Discovery of Witches Comes to the US

Advance Preview: A Discovery of Witches Comes to the US

Today marks the US debut of the series A Discovery of Witches, based on the bestselling novel of the same name by Deborah Harkness.

In a world where witches, vampires, and demons live secretly among humans, the series follows historian Diana Bishop (Teresa Palmer), a witch who denies her magical heritage, refusing to use magic. However, not always in control, when she accidentally uses her magic to retrieve a manuscript in Oxford’s Bodleian Library that has long been lost, her world is turned upside down. She is approached by vampire Matthew Clairmont (Matthew Goode), who has been looking for the book for over a century, as it may contain secrets to his heritage. He tells her that other creatures will be looking for it as well and she is not safe. Witches don’t trust vampires, but can she trust this intriguing man, and can he protect her from not only other creatures, but also others of her own kind and help her separate the truths from the lies? 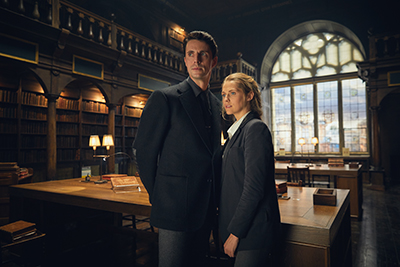 I found myself quickly pulled into Diana’s world. The scripts are fantastic and I love that the story balances drama, action, science fiction, and romance. I feel that it will appeal to a larger audience, and has something for everyone. I felt myself after each episode so excited to see what was happening next. It isn’t just a romance, but has an intriguing story intertwined to keep you entertained, though I have to admit, the story of Diana and Matthew’s forbidden love is one of my favorite things about it.

There are a lot of interesting parts brought into the story throughout the season as it becomes more complex, such as with the edition of the demons.

The cast was well chosen, and Palmer and Goode have instant chemistry onscreen. The scorching looks between them really entices you as a viewer and makes you root for them. 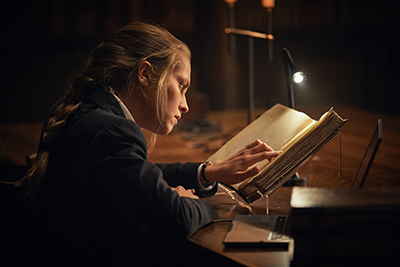 The look of the show is gorgeous, set against the background of magnificent architecture, as parts are filmed on location in Oxford and Venice.

Although I have not read the book series, after watching season one, I am excited to. I’d like to not only see the similarities and differences, but also read ahead, because I can’t wait to know what happens next and potentially in season two.

Starting today, you can stream season one of the series in its entirety on Sundance Now, Shudder, or AMC Premiere.
Twitter
BotonSocial por: SocialEmpresa
Category: TV Reviews & Recaps