I’m not sure exactly when the season stepped up a notch. I personally feel like it started with “Making Angels”, but looking back, it’s been a fairly steady progression to bring the story to this point. And the results are stunning: this show hasn’t been this gripping or compelling in quite some time. Filled with callbacks to the first season and more than a little misdirection, this is another strong entry for the fourth season.
The notion of a human “hive mind” population is nothing new, but it does pertain directly to what “Fringe” has always explored: the concept of consciousness and perception. Sean is considered schizophrenic because he is hearing voices. Unfortunately, he is the product of one scientist’s attempt to create “a better human being”. How many mad scientists have we seen on this show? Once again, just because something can be done, doesn’t mean it should!

Taken in context with other recent episodes, it’s beginning to paint a distinct picture. Are the Observers just humans that have been altered through genetic manipulation? It’s not a new theory, but it would fit the overall scheme that has emerged. We’ve seen what can happen when an unprepared human mind becomes aware of more than one universe at a time; it rarely ends well.

But Olivia is far from typical, having an intrinsic ability to cross between universes. And now the mixture of her regular dosing with cortexiphan and exposure to the conditions at Westfield has resulted in the apparent restoration of her memories from the original timeline. Oddly, it seems as though it’s a mixture of old and new memories, and yet, she’s taking it in stride. It’s as if she is uniquely suited to manage whatever mental conflicts might arise from the situation. And it’s notable, because even Peter isn’t sure what to think of that. 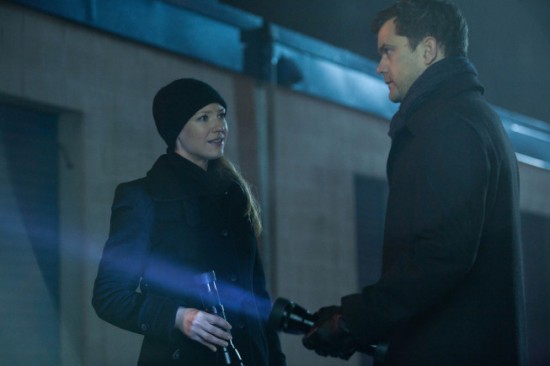 On the other hand, I’m not so sure that it’s unique to Olivia. Walter is also showing signs of returning to “normal”, though it’s more a matter of confidence and competence. Walter was clearly a broken man at the start of the fourth season, yet the longer Peter is around, the more Walter acts like his old self. It makes me wonder if Peter’s presence is wearing away whatever “overlaid” timeline changes were made when he disappeared. It points, once again, to the idea that the Observers altered the timeline without a full understanding of the “repair” they were making.

Meanwhile, the writers delivered a plot twist that we probably should have seen coming. Separating Peter and Olivia just when it seemed like they were back on track is hardly a new ploy, but having her wake up with an equally imprisoned Nina Sharp was a jaw-dropper. Then again, the writers foreshadowed this by making Brandonate a shapeshifter, and reminding us how clever they were at playing their roles. And since we’ve always had questions about the real Nina Sharp, any seeming inconsistencies were easy to rationalize. It’s a brilliant move.

All of these speculations about the Observers that have been building over time look to be fodder for the very next episode, which has me very excited for the future of this season arc. We’ve long speculated that the real antagonists this season would end up being the Observers in some shape or form, perhaps by proxy of Mr. Jones, and there’s a good chance that will be the case.