After a pair of stronger episodes, "Alcatraz" falls back into previous patterns with an episode that could have been ripped line for line from “Kit Nelson”. In fact, it is extremely difficult for me not to just copy and paste that review into this one. All of the same criticisms apply: the vague approach to the development of the mythology, the mediocre procedural elements, the bland and obtuse characters, it seems like nothing but spinning the wheels. Even the flashbacks, which have been the saving grace of the series, fell flat in this episode.
The procedural elements continue to be the most predictable and frustrating parts of the show. Soto again uses his expert knowledge of Alcatraz to identify the killer amongst the myriad of crimes committed in San Francisco. Madsen engages in some half-hearted detective work, and they manage to discover that McKee, who kills using poison, is planning to gas a subway car full of people. "Alcatraz"’ plots have not been strong so far, but the logic in this episode was weaker than usual. The character’s logic didn’t translate from the flashbacks to the present day. His flashbacks showed McKee hated bullies. But throughout the modern day period, he killed seemingly at random, with no purpose. One of the things that made some of the earlier episodes of "Alcatraz" so strong was the compelling villain of the week, but without that, this episode really suffered. 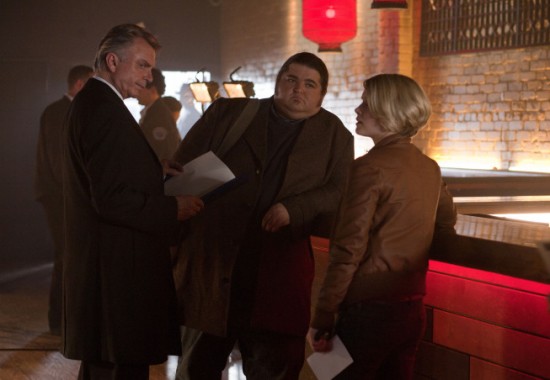 Which when it really comes down to is the inability of the writers to use these cases of the week to drive some sort of central plot or character growth forward. We’ve seen instances of that, particularly with “Cal Sweeney” where the case of the week attempted to link with a mirrored development in Soto’s character. But there it just was done poorly. I hate to make the comparison, but looking at how this season’s "Fringe" has handled their standalone episodes and turned them from potentially simple stories into remarkably poignant commentaries on the human condition and the larger plot and some pretty interesting questions about reality and perception of it. I’m certainly not expecting that depth or complexity, but "Alcatraz"’ attempts so far have been very ham-fisted and telegraphed.

We saw little advancement in the mytharc elements in this episode as well. We had another data point, in which we learn that the 63's don’t dream, and that Lucy is in fact dreaming, even though she is still in a coma. We also get to see Jack Sylvane again, and the short scene that he is involved in is by the far the best scene in the episode. He and Madsen have some chemistry, and the characters seem to wake up from their slumber. But it’s fleeting, with Madsen becoming more and more passive as the episode went on. Even after the revelations of her link to Alcatraz’ history and Hauser’s concealing it from her, it’s extremely frustrating to see her roll over and not even try to push against his sidelining her from the larger picture.

This episode again covers the same ground we’ve seen since the beginning of the season, and only this time the writers are using up the good will of the audience. While I’m not sure how much the behind the scene’s trouble has influenced this show in particular, it’s painful to watch something that has demonstrated such potential settle for such blatant mediocrity.