Tonight, Southland returns to TNT for its fourth season.

Having not seen Southland before I didn't know what to expect. I was surprised by the format, as it does not follow the usual procedural drama model. While it's obvious the show has an overall story line with the characters, there wasn't much of an overall plot line for the episode. The episode was comprised of multiple short segments with each group of cops. It reminded me of what you would expect to see on a show like Cops. That is not to say that the format doesn't work for the show; it does. It gives it more of a realistic and gritty feeling, and with everything going on throughout the episode it seems to be more of an action driven drama as opposed to focussing more on the characters. Doing that makes this series unique. It focuses more on external then internal, which again adds to the show's authenticity in a way, but it also focusses more on the everyday lives and interactions of the policemen as opposed to things like the motivation of the criminals or details of the crimes. 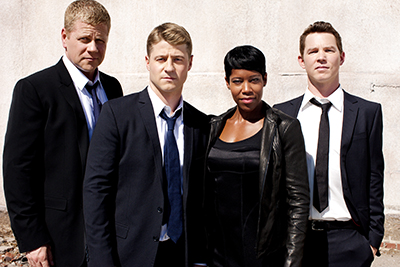 This may turn off some viewers, and it is confusing at the beginning if you haven't seen the series, because it does jump right in. There are no previous explanations for those that have not seen the series before. I hazard to say if you know the show this could be a good thing; sometimes that kind of exposition can bog down an episode, though it is unusual not to have it in a season premiere. I do not know if when the show airs on television they will show any previous scenes at the beginning.

That being said, the show was action-packed and fast paced. It definitely displays a different attitude of cops then most of the procedural dramas I have seen - it focuses a lot on cop behavior, and its not always how one would hope cops would behave, though that does make it more believable than the heroes that these type of shows often display.

Without giving anything away, some of the character story lines in the episode include Dr. Lydia Adams (Regina King) working with her new partner Ruben Robinson (Dorian Missick) as she tries to help someone from her past. Officer John Cooper (Michael Cudlitz) has returned after back surgery and treatment for a drug addiction, and also has a new partner, Jessica Tang (Lucy Liu). Officer Ben Sherman (Ben McKenzie) moves up, no longer a trainee, and comes to blows with another cop (Lou Diamond Phillips).

If you like police dramas and high-energy action, and are looking for something different, Southland may be just the show for you.
Twitter
BotonSocial por: SocialEmpresa
Category: TV Reviews & Recaps